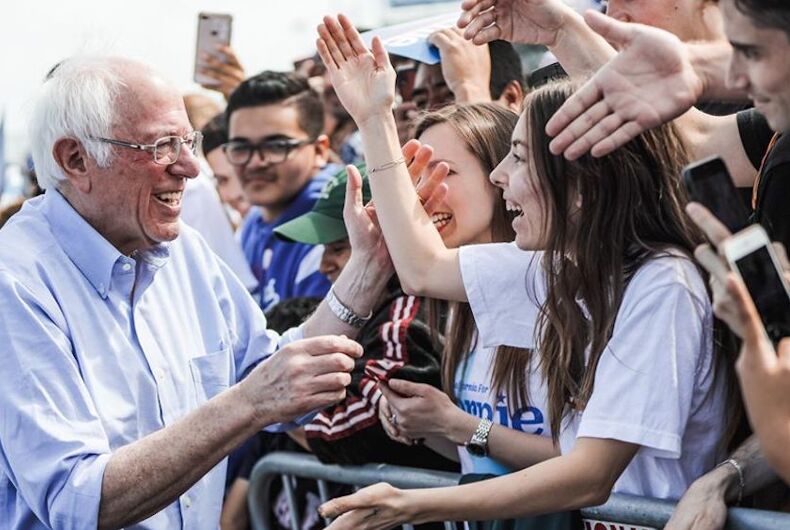 It may cause a great freakout, but Sanders’ demonstration of such an impeccable performance in Nevada makes him the clear frontrunner for the Democratic nomination.

It’s no secret that the Democratic party establishment isn’t as smitten with Sanders as voters are. There are valid reasons: for one, Sanders isn’t exactly a Democrat, even though he caucuses with them in the Senate. For years, he ran for elections as an independent. In 2015, he formally declared himself a Democrat when he launched his race for president.

That’s a minor irritant compared to the actual problems that the establishment has with Sanders’ candidacy. He’s a self-declared socialist who has a take-no-prisoners approach to political ideology. He’s promised to eliminate private health insurance in favor of a public system, an idea that does not poll well and for which Sanders has yet to put a price tag on.

Sanders is untested in a national contest, and he just had a heart attack last fall. Also, his army of ‘Bernie Bros’ don’t help with Sanders’ popularity, as they have launched over-the-top attacks on journalists and women who don’t swear unequivocally by their candidate. If this sounds a little bit like a left-wing version of Donald Trump (minus the racism), you wouldn’t be entirely wrong – like Trump in 2016, Sanders is the outsider that the party most feared as a departure from its long-standing policies and as the biggest risk to electability.

There are many primaries that still need to play out, and Super Tuesday may add a new wrinkle to the story as Michael Bloomberg finally appears on actual ballots. But, it’s hard to see anyone else who can keep pace with Sanders.

Pete Buttigieg’s victories in New Hampshire and Iowa didn’t do him much good in Nevada, a much larger and more diverse state. Sen. Amy Klobuchar’s attacks on Buttigieg in last Wednesday’s debate didn’t give her a much needed bounce. Sen. Elizabeth Warren did seem to get a bit of a boost from her debate performance, but not enough to make much of a dent.

What’s worrisome for all three is that their campaigns are starting to run low on money. By comparison, Sanders is a fundraising machine, and Bloomberg is a billionaire who is self-funding his campaign. If donors began to believe that a candidate’s odds of winning are small, money will dry up even more.

As for Joe Biden, he at least scored a second place finish, which will allow him to save face. His campaign has been trumpeting South Carolina as his firewall, but if he doesn’t do well there, it’s hard to see what his path forward might be.

Soon, Bloomberg may be the only other viable candidate left standing, but he is a flawed vessel, to say the least. Besides being a dreadful debate performer, his support as New York City mayor for stop-and-frisk, which was designed to disproportionately targeted minority citizens, is a major liability for a party that needs black and Latino support. By comparison, Sanders did well with Latino voters in Nevada.

Add to that Bloomberg’s misogynistic and homophobic comments (which Warren brutally emphasized in the debate) and his company’s pattern of sex discrimination, and you have a candidate who could manage to alienate much of the Democrats’ base. Finally, it’s clear from the support that Sanders is getting that a lot of voters aren’t all that fond of billionaires. It doesn’t help that Bloomberg served as a Republican mayor.

It goes without saying that there’s still a lot of voting that’s yet to happen, and anything goes in today’s political world – but the shape of the race, which has been frustratingly fluid, is beginning to take shape. It’s Sanders’ to lose.

As for the November election, that’s still a big question mark. What a Sanders’ candidacy means for Democrats’ hopes of defeating Trump is still anyone’s guess.

Bernie Sanders is projected to win Nevada. Pete Buttigieg appears to be his closest competitor.