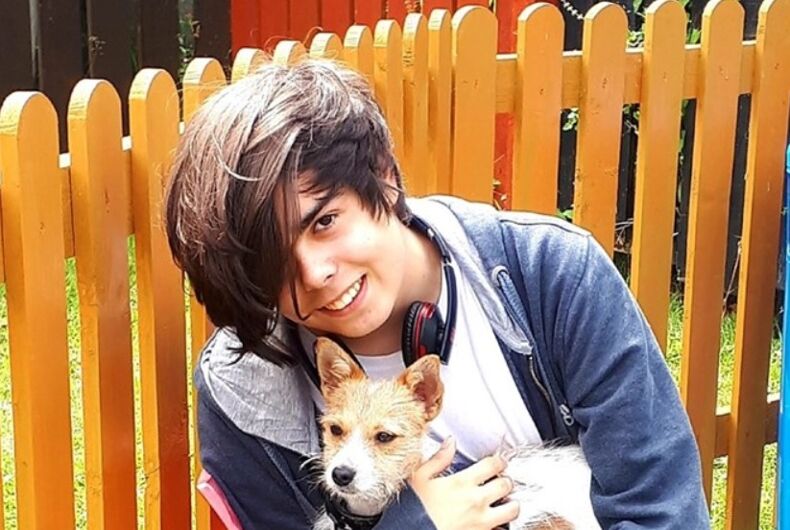 Cameron Warwick, 16, died by suicide after years of bullying since he came out at school.

Warwick, who lived in Hampshire, England, was autistic and struggled with depression. The victim’s mother, Kerry Warwick, 38, said that her son’s mental health and his grades had been suffering for some time before his death due to the homophobic and ableist bullying.

Related: You cannot be pro-life & anti-LGBTQ

She said that students would throw food at him during lunch and call him an “autistic f**k.”

“The bullies would prey on the fact he was gay,” Kerry Warwick said at a judicial hearing. “He was ostracized, with pupils refusing to sit with him and calling him names.”

She said that some of it might have been “banter,” but that didn’t matter because “he didn’t understand it.”

“He had resigned himself to the bullying” by the time he was 14, she added.

She said that her son turned to self-harm to cope, biting and hitting himself. She also said that he attempted suicide for the first time two years ago.

Warwick liked to draw, and the investigation into the teen’s death found that suicide “was a theme with his drawings.”

“I believe Cameron was relentlessly bullied at school by other students for coming out as gay,” friend Christopher Robertson, 18, told investigators. Robertson knew Warwick from the internet.

A school friend, 16-year-old Bill Ashcroft, said that he remembered Warwick being bullied at school. “One boy at school told him he was ugly,” adding that Warwick “didn’t keep his mental health a secret.”

Coroner Jason Pegg determined that Warwick’s death was a suicide. “Cameron had this background of autism – which resulted in bullying at times,” he said. “Not only did he take his own life, he intended to do so.”

“Cameron was a much-loved, gentle and kind young man,” his parents said in a statement.

“His illnesses made it impossible for him to continue to live in a world which he did not understand, and one which made little effort to understand him. We miss him with all of our hearts, and would urge others to be compassionate to other people’s vulnerabilities, or to share their own and seek help to avoid other such tragedies.”

The head of the Fareham Academy that Warwick attended, Chris Prankerd, said that he can’t comment on Warwick because of confidentiality laws. But he said that the school has “a robust, zero-tolerance policy on bullying.”

“Having only been appointed as Headteacher of the Academy in September, I did not have the pleasure of knowing Cameron during his time at the school but my deepest and sincere condolences go out to his family and friends,” Prankerd said.

A tribute page in Warwick’s name has been set up and it has raised 1350 GBP (about $1750) for the National Autistic Society and Childline, a mental health service for minors in the U.K.

The Hub in Portchester, England will display Warwick’s art in April.