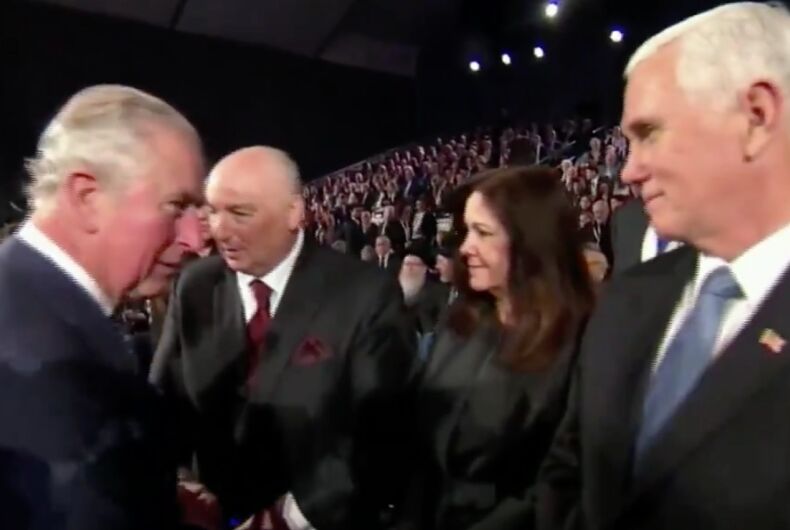 Prince Charles and Vice President Mike Pence stare at each other before separating without any greeting between themPhoto: Screenshot

The future King of England snubbed Vice President Mike Pence and his wife, Karen, during a Holocaust ceremony in Israel. The royal family – including Queen Elizabeth – have both made it clear they are not fans of the Trump administration.

Prince Charles doesn’t even attempt to make nice with the Pences as he glides down the row shaking hands with dignitaries. Instead, he goes straight for Israeli Prime Minister Benjamin Netanyahu without saying a word to the Pences.

Related: President Trump may be thinking of dumping Mike Pence from the 2020 ticket

How important is that? Netanyahu is currently facing corruption charges and he’s still worth a handshake. Pence, not so much.

This isn’t the first time Pence has been shamed as he travels the world. The Vice President is notorious for his nonstop attacks on LGBTQ rights and world leaders have trolled the holier-than-thou politician over it since his inauguration.

Late last year, the president of Iceland greeted Mike Pence with a handshake – and a rainbow bracelet – as Pride flags flew across the street. The prime minister of Ireland gave a small speech when he met Pence and said that countries that love “freedom and liberty” don’t judge people based on their sexual orientation.

“This is not true. VP and Prince Charles spoke prior to entering the event floor and after his remarks as well,” she tweeted. She tweeted a photo of Prince Charles and the Vice President talking earlier in the day.

Church of England says that married gay couples should be abstinent