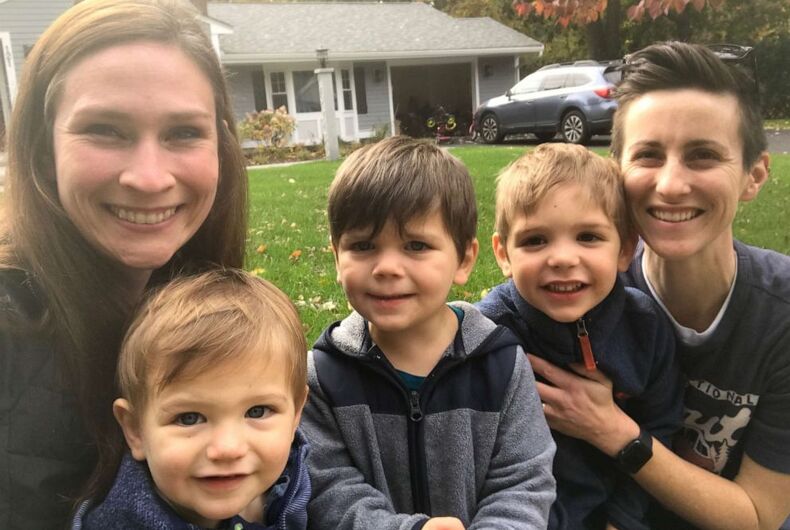 The Currie family adopted three brothers last year to keep them from being split apart by the system. But if they were in Tennessee, they may have had trouble finding an adoption agency to work with under the state's new law.Photo: Screenshot/Currie Family via GMA

The Tennessee Senate approved a measure that would allow adoption agencies to refuse to work with families if they claim that working with those families would “violate the agency’s written religious or moral convictions or policies.”

Related: Lesbian moms adopt 3 brothers to keep them from being split apart

The bill now goes to Gov. Bill Lee (R), who has already told the Tennesseean that he will sign it into law.

HB 836 prevents the state from denying an adoption agency a license or refusing grant money to an agency because they deny homes to children for discriminatory reasons. The bill also prevents people from suing adoption agencies for discrimination if the agency argues that its religious beliefs require it to discriminate.

Tennessee Sen. Raumesh Akbari (D) argued that the bill would deny homes to children who need them.

Tennessee Sen. Steve Dickerson, the only Republican to vote against the bill, said that it was “bad public policy,” citing businesses that may refuse to hold events in the state because of the bill.

“I think we can probably kiss that goodbye,” he said, referring to several major sports events.

Tennessee does not currently forbid adoption agencies from discriminating against LGBTQ parents, but the law could threaten local anti-discrimination ordinances in several cities like Memphis and Nashville.

According to the Washington Blade, Tennessee will soon join nine other states that have passed laws allowing adoption agencies to discriminate against LGBTQ people, even if they receive government funds: Virginia, Oklahoma, Kansas, Texas, Alabama, Michigan, Mississippi, North Dakota, and South Dakota.

The Democratic debate was really about who can beat Trump