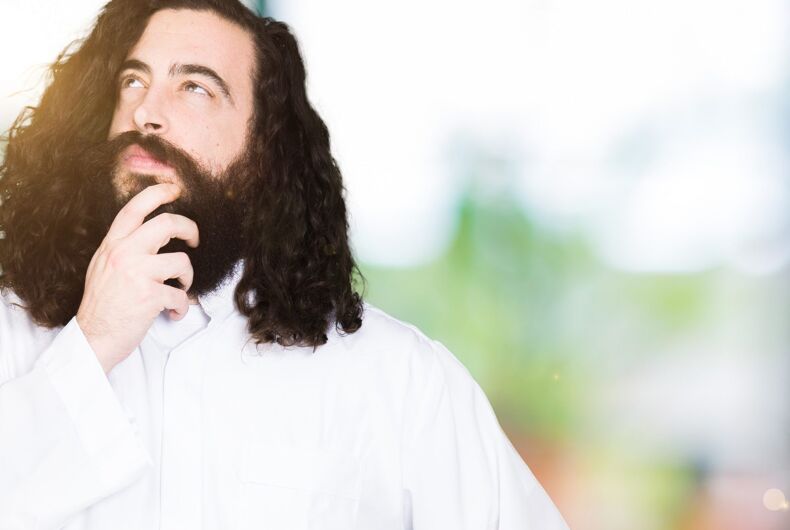 Disgraced televangelist Jim Bakker went to jail for defrauding his followers out of millions of dollars, but he’s continued his career as a charlatan by hawking “End Times” buckets of dehydrated food to gullible Christians. In between shilling for instant mashed potatoes and soup mixes, Bakker also likes to dabble in political punditry.

But this time, even Bakker may have gone too far. His live studio audience laughed instead of applauding.

Related: Right-wing preachers have turned their shows into infomercials

Bakker told viewers that the President should not be impeached and the only way to salvation is through Donald Trump.

The scamvangelist told followers that they should “forgive” Trump because it’s the Christian thing to do. Trump, though, infamously said he never asks God for forgiveness.

“You know what? Trump is a test whether you’re even saved,” Bakker said to hammer home his theory that Trump is a test of faith for Christians. “Only saved people can love Trump.”

Bakker was convicted on 24 counts of fraud and conspiracy when his television network went under after he fleeced the faithful of millions of dollars that he spent lavishly on himself. He had resigned shortly before that after a sex scandal.

As any real preacher can tell you, the entire point of Christianity is that you can only be “saved” by believing in Jesus Christ as the messiah. The Bible does not mention Donald Trump, who cannot even name one Bible verse or pronounce the name of Biblical books correctly.

Evangelical Christians are the President’s biggest supporters. White evangelicals are the least Christ-like according to a new poll of religious people.

Here is Jim Bakker saying that Trump is a test to determine whether or not people are "saved."

The comments section below is here for you, twitter-have at it. pic.twitter.com/LTlYmA5ZlV