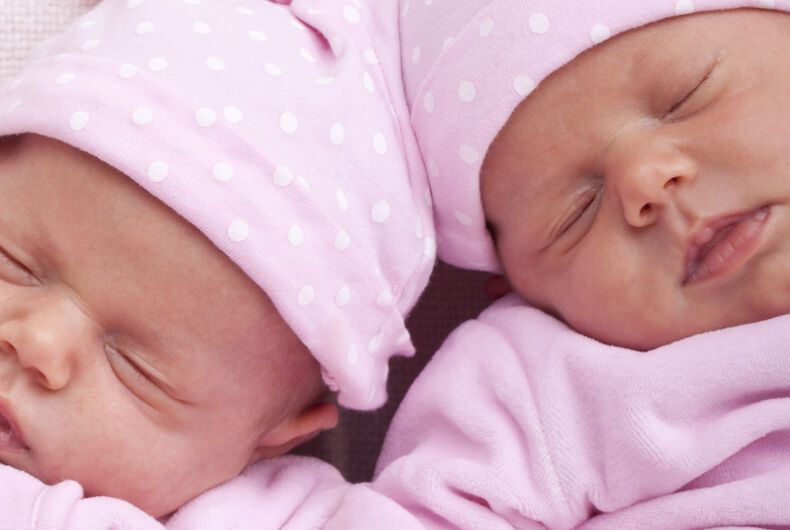 Steven and Marc Winchester-Horscraft — a married gay couple from Shropshire, England — have launched a crowdfunding campaign to help cover the $34,100 in legal costs after the surrogate mother of their newly born twin girls refused to sign over parental rights unless they paid her an additional $4,000 on top of the $22,300 they’d already paid to cover her other fees.

In their GoFundMe page, Steven wrote that their “long, excruciating nightmare” began when their twin girls were born prematurely at 28 weeks instead of the usual 37 weeks. As a result, the newborns had lots of health difficulties.

After their surrogate announced that she had gone into labor, the couple took a 3.5-hour drive to the hospital to find out upon arrival that their second daughter was a “breech birth” (coming out feet- or butt-first rather than head-first). The dangerous delivery condition that left the infant “covered from head to toe in bruises.”

The twins were then placed in the neonatal intensive care unit (NICU) and “were fighting for their lives on a daily basis,” according to Steven. The girls required blood transfusions, lumbar punctures, treatment for various infections, and numerous x-rays. The firstborn child also required resuscitation in the hospital twice to keep her alive.

One evening when the couple came home from the hospital, their surrogate’s boyfriend came over to demand an additional $4,000 for the surrogate’s troubles. The fathers couldn’t afford it, and so the surrogate decided to list her boyfriend as the father on the child’s birth certificate instead of Steven, the child’s biological father. She also refused to sign the parental order that would’ve handed parental responsibility of the newborn twins over to the gay couple.

The surrogate also renamed the daughters and forbade the hospital from giving the couple any information about their care, leaving the men in the dark as to their sickly daughters’ health.

After a lengthy and costly court battle, a court-ordered DNA test proved Steven’s paternity and the twin girls are now home with their fathers. However, the financial and emotional costs have made it so that the couple hasn’t enjoyed any time with their infant daughters. Now the couple is asking the public to help cover the $34,100 in legal costs they incurred.

“We are both nurses and have spent our working lives caring for others,” Steven wrote. “I guess I am just hoping for some help from others in order to get us out of this awful situation.”