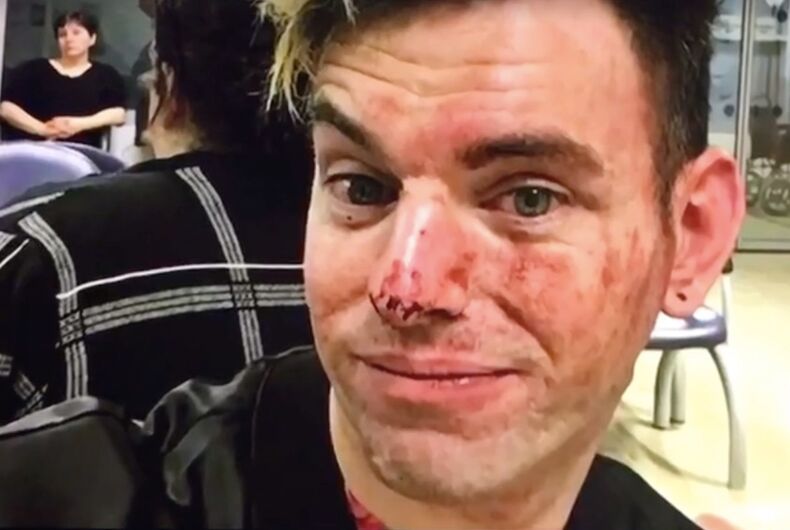 Lee Brobson was punched by two attackers in a would-be gaybashing in Essex, England when defending two gay friends during a night out drinking.Photo: BBC screen capture

A 30-year-old man named Lee Brobson says he was beaten up by two men on January 26 while defending his two pals from a homophobic attack during a night out drinking in Chelmsford, an English city in the shire of Essex about 40 miles northeast of London.

Brobson and his two friends, Dan and Clark, were walking from one bar to another when they saw two men near a local fish and chips shop glaring at Dan and Clark holding hands. When Clark said hello and asked what they were gawking at, the men started following the group and calling them “f*****s” and “unnatural.”

Brobson says the men grabbed one of his friends, and when Brobson tried to calm the men down, the men punched him in the nose. When he fell down, they then repeatedly punched him in the side of the head leaving his friends alone. The attack left Brobson bloody and in the hospital for nine hours. He now wears makeup to cover his bruises.

“I could have lost my life,” told the BBC. “Anything could have happened: They could’ve given me some serious brain trauma. they could’ve had a knife, they could’ve been more of them hanging around the corner just waiting for the response.”

“I went in there completely non-confrontationally, [with] open palms,” Brobson said. “They set into us. They were going for blood.”

While he doesn’t regret standing up for his friends, Brobson says he wouldn’t want anyone to experience the trauma he experienced.

He’s using the incident to help raise money for the Switchboard LGBT+ Helpline, one of the oldest queer hotlines in the U.K. which provides informed, empowering and non-judgemental support for any inquiries about sexuality, gender identity, sexual health, and emotional well-being.

Police have labeled the incident a hate crime and are currently looking over video footage for images of the suspected attackers.

My interview with BBC Look East about the assault on Sunday