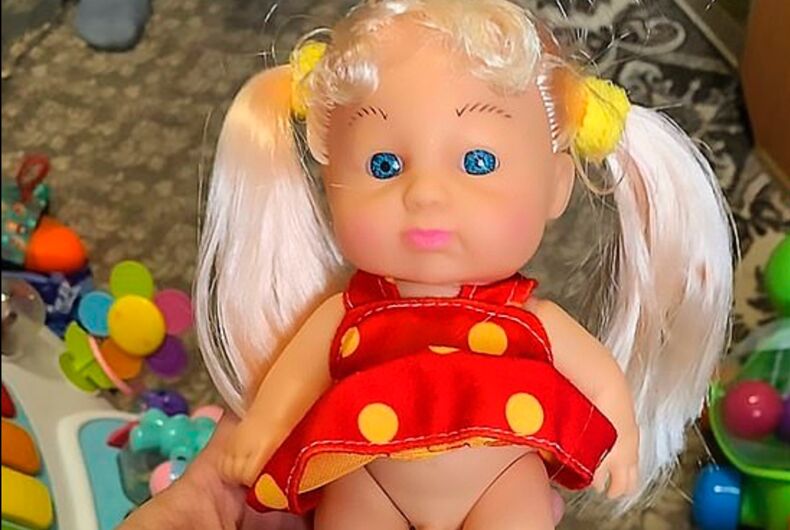 A Russian "transgender doll" has long flowing hair and wears a dress, but has male genitalia. Photo: CEN/@revizor.nsk

Russians are up in arms over a “transgender doll” spotted in a Siberian toy store. The doll has long flowing hair and wears a dress. It also has male genitalia.

“Is it ok to produce toys like that for children?” one social media user asked. Russia has notoriously strict anti-LGBTQ “propaganda” laws that ban everything from online support groups to pride parades.

Related: This grandmother gave her trans grandson the most beautiful & affirming gift

The only person prosecuted under the law has been a teenager who posted images of shirtless men on social media. Recently, a Russian school threatened to expel a student for using a pink phone case.

Anti-LGBTQ sentiment runs rampant in Russia and is fanned by Russian authorities at the highest level. Vladimir Putin has repeatedly slurred the queer community and tacitly authorized violence against LGBTQ people.

Reactions to the doll were overwhelmingly negative and vicious.

“All they have to do is buy a medical tool kit and the kid can learn how to amputate,” one social media user wrote about the doll.

In 2017, a doll based on teen transgender activist Jazz Jennings was released in the United States.

“Jazz stands for everything I respect from a human nature point of view — she’s incredibly brave, intelligent, warm-hearted and creative,” Tonner Doll founder Robert Tonner said at the time.