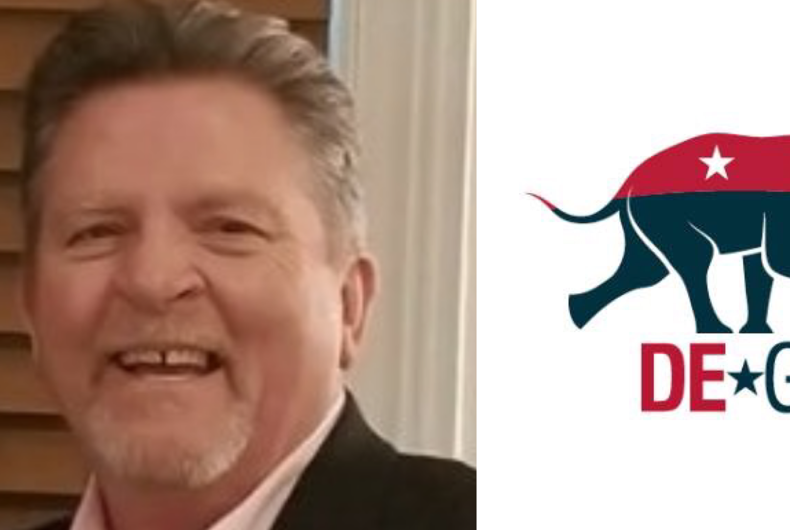 County chairman Chris Rowe (left) has already resigned, but remains at odds with his state's Republican chapter.Photo: Composite via Facebook

Republicans have successfully pressured Delaware GOP official Chris Rowe into submitting his resignation on Thursday, after the New Castle County chairman wrote online that “f***ots cannot handle reality.” Yet, Rowe is still using his official title and using Facebook to speak out on the incident further.

Delaware Republican party chairwoman Jane Brady confirmed in a statement that she called Rowe on Wednesday and personally asked for his resignation. “His comment was offensive and did not reflect the values of respect and tolerance held dear by the Delaware Republican Party…ultimately, as a result, he lost the support of those he was to lead.”

Rowe was frustrated that YouTube kept removing videos he attempted to share from the recent shooting in a Texas church near Fort Worth, where two people were killed by a shooter before a security officer gunned him down. Videos of mass gun violence are against YouTube’s terms of submission, but Rowe took to Facebook to twist it as part of a political agenda by both websites.”

@GOP I know you all think like this, but the chair of the New Castle County (Delaware) is blatant in his homophobia. pic.twitter.com/z0wErpXrRi

“F***ots cannot handle reality. Bad guy loses FB pisses themselves,” Rowe wrote in the comments section, according to screenshots provided by Blue Delaware, as reported by the Delaware News Journal. Rowe then posts a Breitbart link to the violent video to a person named ‘Greg’.

After his resignation was accepted on Thursday, Rowe claimed to The Associated Press that he made the decision “begrudgingly and only under duress” because he “serves at [Brady’s] pleasure,” and she made clear that he was no longer fit to serve.

Rowe then returned to Facebook, saying that he has nothing to apologize for – as the comment was “locker room talk” between him and Greg, who he claims is a lifelong friend of his. Rowe even went as far to say he was justified in using the term because he has “been using that word since before it ever meant what people are offended by today,” he wrote in a now-deleted Facebook post. “In this context I used it for it’s impact & it was between close friends. … It was locker room talk between 2 men,” he concluded.

Now, in subsequent posts, Rowe is still referring to himself as “Chairman, New Castle County Republican Committee” and is still the central topic of the organization’s Facebook page. He’s now promising ‘a video…in response to his use of one certain word’ and promoting an appearance on the radio coming this Monday. This is further upsetting his once-constituents, with one reader commenting, “A resignation does not need a video. Just a simple ‘I resign’….Reprehensible. Resign. Right-away.”

NCC GOP Chair Chris Rowe will be releasing a video over the weekend in response to his use of one certain word on one of his posts.

Posted by The GOP of New Castle County on Thursday, January 2, 2020

Jordan’s remarks, in part, read that Jewish people were “Jews In name only” if they supported the impeachment, and that they “have been enrolled to come and testify, to come and interrogate” by Democrats “to try to look credible to the people of this country.”

The tipster that bought the attention of the comments to the public claimed that he has been called “that f*g Jew” in public by other Republican officials in Sussex County as well.

In stark contrast to Rowe, Jordan has not publicly commented since these reports. As Jordan was elected to her position, she “would either have to resign on her own or go through a process that would remove her,” according to Brady and other GOP officials. This could happen “fairly quickly,” a party spokesman told the News Journal.

“In today’s hyper-political environment words are often used without much thought as to their actual meaning,” Sussex County Republican chairman Don Petitmermet said in a statement that CNN reports in their summation. “That said, we can and must do better.”

You can see the Delaware Republican Party’s full statement below.

January 2, 2020Press Release from the Delaware Republican PartyWilmington, Delaware–Jane Brady, Chair of the…