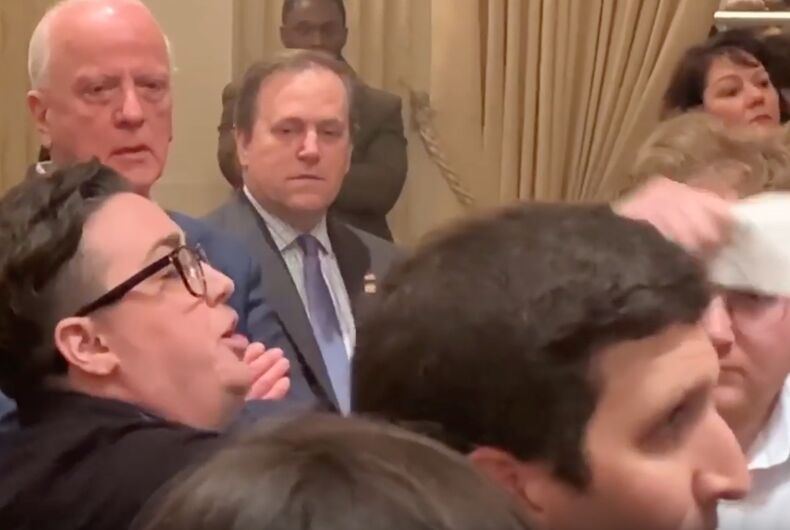 Members of “Queers Against Pete,” an anti-Pete Buttigieg group, interrupted a fundraiser for the out candidate repeatedly at a downtown Chicago fundraiser.

Two protesters harangued Buttigieg over college tuition plans and police violence but he quickly shot down their specific allegations as not factual while addressing the larger topic.

Buttigieg is the only out candidate on the ticket and despite his minimal differences from other candidates’ positions, the group has not protested them. None of the other candidates face LGBTQ opposition groups, but Buttigieg has also repeatedly faced protests from religious right activists.

Gregory Cendana, a former labor leader, interrupted Buttigieg as the candidate took written questions submitted by attendees out of a fishbowl. Cendana’s allegation was over the candidate’s plan to tackle college tuition debt.

How can a “transgender, queer, or nonbinary teen who is disowned by their wealthy, homophobic parents and therefore cannot afford college,” Cendana shouted from the audience, “because you oppose universal free public education and the majority of voters do?”

Buttigieg’s plan would provide free college to all except the children of the extremely wealthy.

“I have great news for you,” Buttigieg countered. “That person will get free college under my plan because what we are doing is basing it on somebody’s ability to pay. Now, if you are in the top 10% by income, I am going to have to ask you to pay your own tuition.”

Another protester, Jes Scheinpflug, challenged Buttigieg on his response to the police shooting of Eric Logan, a black robbery suspect, by a white police officer. The candidate has frequently been challenged over the incident on the campaign trail.

Scheinpflug described themselves as “queer and nonbinary” before starting a lengthy demand to be allowed to speak.

“I need you to respect me and respect my question and respect the people of South Bend!” they shouted. “You’re saying solidarity, you’re saying rules of the road and you’re not following them yourself. You don’t love me. You won’t let me ask my question.”

Despite Buttigieg’s offer to meet with Scheinpflug personally after he finished taking the already submitted questions, they refused to be silent until the candidate finally gave in.

“Mayor Pete, as somebody who says you want to unify communities, as someone who says they want to follow the rules of the road, there are police officers in South Bend who kill people. What’s his name Logan…” Scheinpflug said, struggling to recall the name of the victim.

“Not what’s his name,” a visibly perturbed Buttigieg said. “His name is Eric Logan.”

“There’s so many, I can’t keep track anymore,” the protester shot back.

“That’s false,” Buttigieg replied, referring to how there have not been multiple police shootings in Buttigieg’s hometown.

“How can we trust you will show up for queer and trans people and people of color,” Scheinpflug continued, “when there were eight community meetings in South Bend about a police officer who killed someone in your community and you did not go to them?”

Buttigieg responded by noting that he had organized the meetings with “rank-and-file officers to elected leaders to some of my harshest critics, and people who have been in my administration all along” to “empower the community.” He also said that he had attended one of the meetings unannounced so it wouldn’t politicize the meeting.

“We wanted the conversations to be real. We wanted them to lead to actual change that could be implemented,” Buttigieg said. “In order for that to happen, we had to have conversations that got out of the circus and into the heart. And so those conversations, I knew, would be at their best when they were as far away as possible from presidential politics.”

“I’m not standing up here, as I hope to earn your vote, saying that I have earned it by getting everything perfect, that racism, poverty, homelessness and exclusion have come to an end in my city during my time as mayor any more than they’ve come to an end anywhere,” Buttigieg said. “But we have made so much progress.”

“The president doesn’t have any more of a magic solution than a mayor does, but there are concrete things that have to be done using the powers of the presidency to deliver greater justice, especially when it comes to issues around race. It matters. And I am asking voters to send in somebody who knows the good, the bad and the ugly, who knows what is at stake and what can be done in order to get these things done.”

The protesters tried to interrupt again during Buttigieg’s closing remarks but the audience applauded loudly to drown them out. They also drowned out the last of the candidate’s speech.