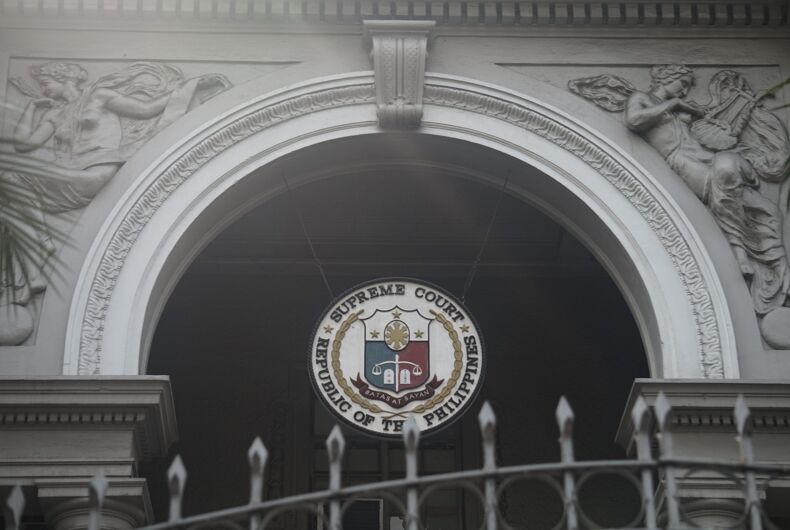 The Supreme Court of the Philippines has decided against hearing any further arguments or appeals on Falcis III vs. Civil Registrar-General, meaning that same-sex marriage will remain banned in the country.

This is the second time the petitioner, out gay lawyer Jesus Falcis had brought his argument to the court. His petition argued that the Family Code of the Philippines discriminated against his civil rights because the law “define[s] and limit[s] marriage as between man and woman.”

Related: A group of Pentecostal Christians showed up at Pride to apologize for their homophobia

The Family Code also “mentions homosexuality or lesbianism as grounds for annulment and legal separation,” according to ABS-CBN News.

Falcis first filed his petition in 2015, hypothetically challenging the Family Code; there wasn’t an incident or actual occurrence that caused the filing. This annoyed some of the justices on the court when they first heard Falcis’ petition in June 2018. They even held the petitioners in contempt during the arguments.

This September, the Court ruled against Falcis’ petition, saying his arguments suffered from a “lack of legal standing, failure to raise an actual justiciable issue and violation of the doctrine of hierarchy of courts.” The author of the decision, Associate Justice Marvic Leonen, did note that “the Constitution does not define or restrict marriage on the basis of sex, gender, sexual orientation, or gender identity or expression.”

He also pointed out the history of discrimination against LGBTQ+ people in the country, which gave some a glimmer of hope for a different ruling in the future.

When Falcis asked the court to consider the petition again, however, the Court “resolved to deny with finality” any further arguments in this case. That means Falcis cannot ask for any further decisions or changes to their ruling.

“No substantial arguments were presented to warrant the reversal of the questioned decision. No further pleadings or motions will be entertained,” Court clerk Edgar O. Aricheta wrote.

Culture and politics in the Philippines are heavily influenced by religion. In 2016, then-Senatorial candidate and boxer Manny Pacquiao caused outrage when he compared gay couples to animals on Filipino television.

Former President Rodrigo Duterte has touted on several occasions that he was homosexual but was ‘cured’, ‘renounced’ it and ‘became a man again’. Duterte has often called political opponents gay, such as in 2016 when he called the American ambassador to his country a “gay…son of a whore.”

“The Family Code was crafted to mirror the historical, traditional and religious values of Filipinos on marriage….the Supreme Court decision is a welcome development to us. It reaffirms our belief that we are in the right path,” he said.