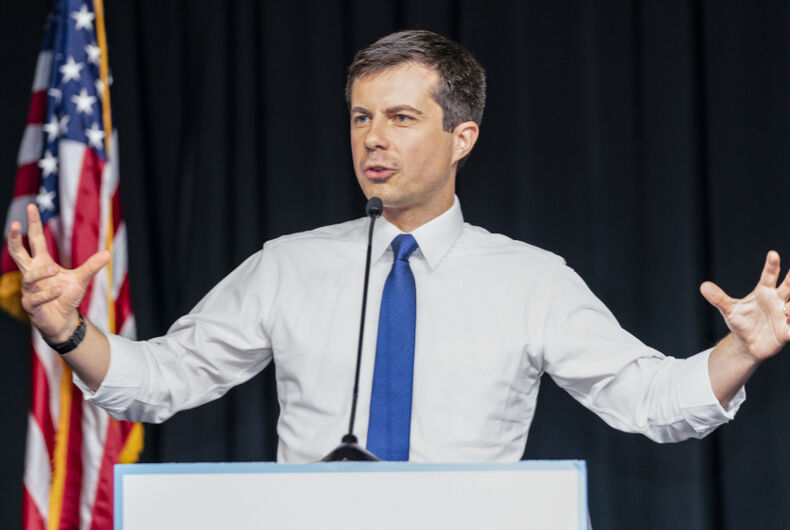 The far right is known for it’s loony conspiracy theories, like QAnon and Pizzagate. But while they right dominates the tin-foil hat market, it doesn’t have a complete monopoly. Case in point: some on the far left think that Pete Buttigieg is a CIA agent.

Buttigieg has denied that he has any connections to the spy agency, but in one of those circular arguments that simply can’t be refuted, his critics say that of course he would deny it. “Anyone who says they weren’t involved with the CIA clearly is not a spy,” an article on the DailyDot claims, sarcastically.

The origin of the conspiracy theory is Buttigieg’s resume. Harvard, the consulting firm McKinsey, a stint in the military — all of these are proof positive that Buttigieg is really part of the Deep State.

“Put together, a picture forms of an elite-educated, multi-language-speaking employee of the CIA’s consulting firm who currently serves as an intelligence officer in the naval reserves,” Steve Poikonen, who hosts a YouTube vlog, told The Daily Beast. “If you created a CIA asset in a lab, you’d wind up with Pete Buttigieg.”

Poinkonen has also pointed to Buttigieg’s “mesmerizing, hypnotic blue eyes” as evidence of the ex-mayor’s spyhood.

Add to that the 200 or so foreign policy and national security officials who have endorsed Buttigieg and you have confirmation of the conspiracy. (Or at least proof that he’ll be a tool of the CIA.)

Of course, you might ask why those officials would risk blowing Buttigieg’s cover by throwing their support to him so openly. But that’s a logical question. Conspiracy theories also have an answer to confound logic.

Even Buttigieg critics who claim to know better can’t help themselves, as a recent episode of the politics podcast Worst Year Ever titled “Is Pete Buttigieg a CIA Agent?” proved.

“Conspiracy theory thinking is like a disease that is doing incalculable damage to the body politic, and like I hate jumping into stuff like that, but it’s so fucking sketchy!” Robert Evans, a podcast host, said. “It’s so hard to not sound like — to not be, in fact — a conspiracy theorist when you talk about this guy, but there’s so much of it that screams fucking spooks.”

What the nuttiness reveals is something more fundamental: a deep-seated loathing of Buttigieg among a particular segment of the left. He’s been tagged Mayo Pete for being bland and white. The fact that President Buttigieg would still be significantly more to the left than President Obama doesn’t satisfy his critics, who despise the incremental approach of both men.

So the virus of conspiracy theories isn’t confined just to the right wing. Unfortunately, it’s contagious to both ends of the political spectrum.