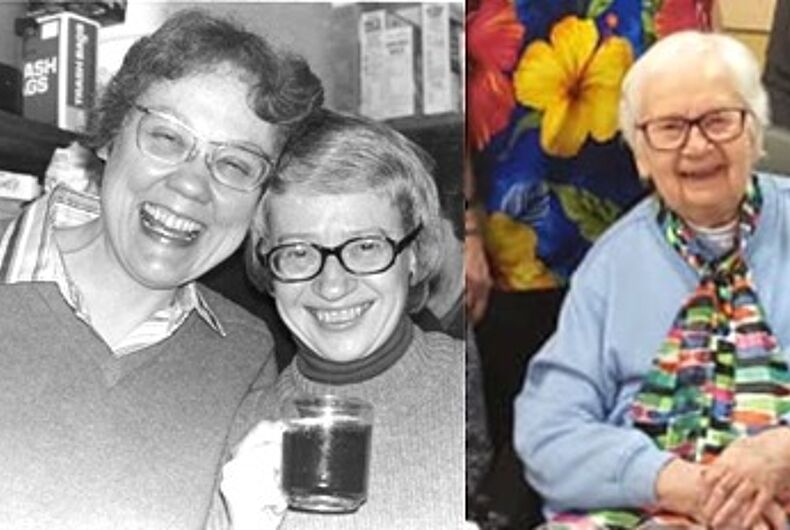 Lahusen is widely recognized as America’s first lesbian photojournalist. While her partner, Barbara Gittings, was the editor of the first lesbian magazine, The Ladder, Lahusen shot photos for the publication’s cover. She made it a priority to show the subject’s faces to prove they had nothing to hide.

Related: Coming out from behind the lens: How one lesbian’s photos captured the rise of gay rights

“I am extremely grateful for your – and Barbara’s – outstanding leadership on securing LGBTQ+ freedoms and creating a more inclusive country,” Buttigieg wrote. “I often say that my marriage exists by the grace of a single vote on the Supreme Court, but that vote would never have been possible without your tireless work over the last 50 years.”

“My candidacy, too, stands on the shoulders of your activism,” he continued. “As president, I will work alongside advocates like you to create a culture of belonging for everyone.”

“I hope that I can make you proud.”

Lahusen lives in an assisted living facility in Philadelphia. Gittings passed away in 2007. The two were together for 46 years.

“She’s one of the people who get credit for the early fight for our LGBT freedoms and she was one of the key photographers of the homophile and gay liberation movements,” he shared on Facebook along with photos.

“She’s still as dedicated and energetic as ever, and a strong reminder to all of us who are still on this sphere at age 90 that we should expect to continue our activism and commitment to the communities of our choice.”

Today I joined lesbian lion Kay Lahusen as we celebrated her 90th birthday in Kennett Square. She's one of the people…