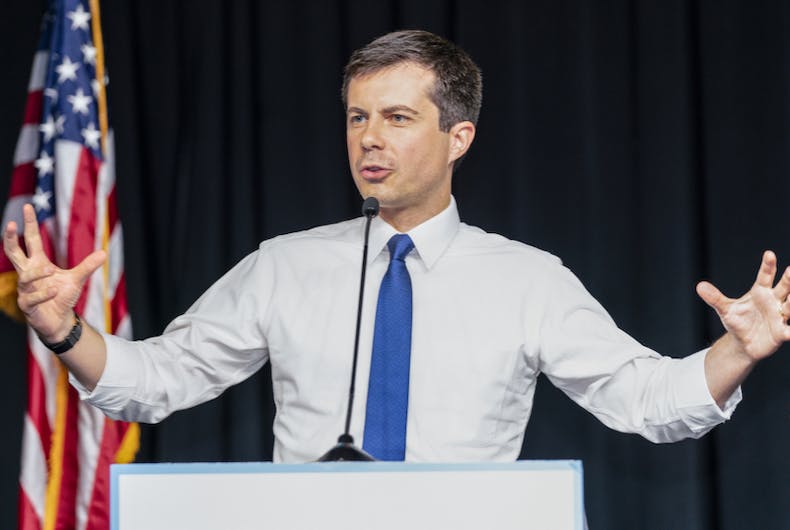 Out presidential candidate Pete Buttigieg has continued to surge ahead nationwide, deflecting a handful of attacks from other would-be Democratic nominees and weathering internet outrage with ease.

Buttigieg, the mayor of South Bend, Indiana is “barreling toward an Iowa Caucus victory” and new polling out of Florida shows him essentially tied with President Donald Trump in the battleground state of Florida.

While former Vice President Joe Biden is the only Democratic contender who bests Trump in the Mason-Dixon poll, Buttigieg is within the margin of error. No other candidate polled that close to Trump.

Buttigieg’s polling in Iowa has continued to climb while the crowds at his campaign stops continue to grow larger, matching the size of rallies for better-known politicians like Sen. Elizabeth Warren (D-MA) and Sen. Bernie Sanders (I-VT).

The candidate has consistently ranked in the top three in Iowa – frequently in first place – and has built an impressive ground campaign according to political veterans. Democratic leaders in the state say the turnout and enthusiasm are starting to match former President Barack Obama’s winning 2008 campaign.

“I just need some hope,” said Julie Gentz, a retired teacher, told Iowa political blog Iowa Starting Line at a rally last month. “I feel like this is a Kennedy moment… It’s a Kennedy moment in one respect, and it’s an Obama moment in the fact that he’s not just your run-of-the-mill politician.”

“He has his way of uniting all of us from different backgrounds and cultures, and just reminding us that we’re all human,” said Laura Miller, 30, added. Miller told the site she plans to caucus for the first time in February as a Buttigieg supporter.

Biden tops Trump by two points in the Mason-Dixon poll – 47-45 – while Buttigieg lags 41-45. The poll has a four-point margin of error and was conducted before the holidays.

Buttigieg, who raked in an impressive $24.7 million in the last fundraising quarter, is the first out gay man to run a credible campaign for president.

LGBTQ Nation reached out to the Buttigieg campaign, but they declined to comment for this story.