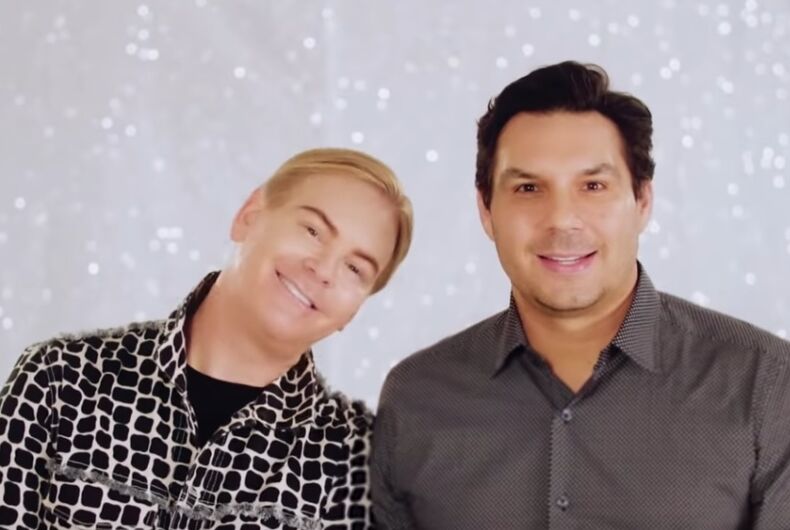 Jerrod Blandino (left) and his husband Jeremy Johnson, co-founder and CEO of Too Faced.Photo: Screenshot/YouTube

The founder of Too Faced, a make-up brand that Estée Lauder bought for $1.45 billion in 2016, has just fired his sister for making transphobic comments about YouTuber Nikkie De Jager.

De Jager, who runs the popular Nikkie Tutorials channel on YouTube that has almost 13 million subscribers, came out as transgender earlier this week in an emotional video. She said that she was assigned male at birth and started living full-time as a girl in elementary school, but that some unnamed people were threatening to out her, so she came out herself.

Related: This truck driver is nearing retirement age, but he’s started a new career… as a makeup artist

Dani California, who goes by @makeupprincess on social media, updated her bio on Instagram to say: “Transgender, huh? That’s not the only thing she’s been LYING about.”

Her message relied on the idea that LGBTQ people – especially transgender women – who don’t out themselves to everyone they know are being dishonest, even though there are lots of reasons that have nothing to do with dishonesty that someone might want to keep their identity private.

Her brother is Jerrod Blandino, the co-founder and current Chief Creative Officer of Too Faced, and he said in a statement yesterday that his sister is no longer an employee at the cosmetics brand.

“I would like to make sure it is understood that although I love my sister very much, the things she says or does have absolutely nothing to do with me and do not in any way reflect me, my opinions, thoughts, or feelings nor speak for me or Too Faced in any way shape or form,” he said.

“I have always stood for love, equality, and kindness in my life and everything I do. I am sorry for the hurt she has caused. Let it be known that I am truly shocked and disgusted to my core at her recent actions.”

“I would like to say how proud I am of Nikkie Tutorials, and how inspired I am for her strength and sharing her beautiful truth with the world,” Blandino added. “I am sending all my love to her.”

A message from Our Founder Jerrod Blandino pic.twitter.com/OdnCT67INK

Too Faced and De Jager have collaborated in the past, putting out an eye shadow and face powder palette in 2016 with De Jager’s name on it. It was later revealed that she received less than 1% of the revenue from the palette and she accused Too Faced of reducing the quality of the product without consulting her.

Dani California was perhaps referring to this incident in her message from this week about De Jager.

Since Blandino’s statement, Dani California has made her Instagram private and changed her bio to “Well God bless your sweet hearts.”

American women are more prejudiced than men against lesbians