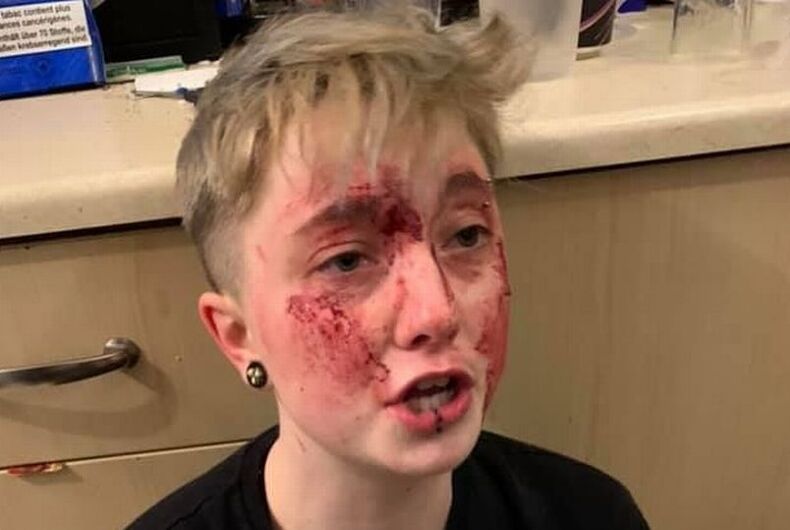 A 20-year-old lesbian attacked by two men this past weekend and left covered in her own blood. This is the fifth time she has been attacked and now she’s afraid to leave her home.

Charlie Graham was walking in the street in Sunderland in northern England at 12:50 a.m. on Saturday when she was punched in the back of the head by one of the assailants.

“I got hit from behind by a fist to the back of my head, then I hit the ground, hurting my legs and face,” she told the Daily Star. Police said that she told them that the attackers called her anti-gay epithets.

“I tried to get back up, but they pushed me back to the ground and the two guys ran off. I was left bleeding and scared.”

She contacted her aunt Natalie Singh who came to help her.

Graham “was dazed and her eyes were rolling into the back of her head and had a bit of concussion from where she fell,” Singh said.

She has had serious pain for the past week and is now suffering from panic attacks.

“It has knocked my confidence back,” she said.

“I don’t go anywhere by myself anymore. I only feel comfortable at my mum’s house. I have panic attacks and anxiety attacks just thinking about going home in case they find out where I live and decide to come through the door, or I get attacked in my own home.”

Graham said that this is the fifth time she has been the victim of an anti-gay hate crime. In the last attack, her eye was split open and she needed stitches to close the wound.

In another attack, someone called her a “d**e” because she was holding hands with her girlfriend and then punched her in the face. In another attack she was left with a black eye.

Her mother Michelle Storey said that her daughter has frequently been the victim of verbal abuse due to her gender expression.

“Me and Charlotte laugh about the verbal abuse but when she is out on her own it must be really hard,” she said.

Northubria Police confirmed the attack, and they said that they are investigating it as a hate crime. No arrest has been made.

Graham said that she wants people to see the pictures of her injuries “so people are aware there are people out there that will attack you for what ever reason they feel is necessary – whether that is your sexuality, color of your skin, the way you walk or how you dress.”