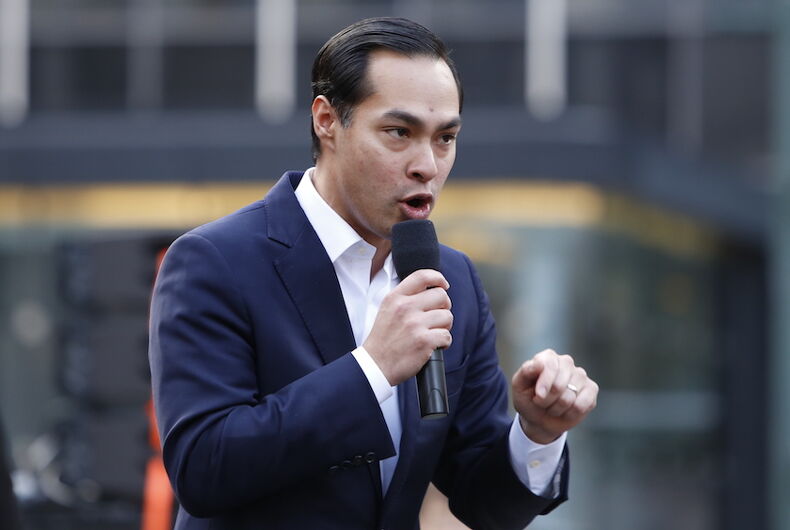 Democratic contender Julian Castro announced today that he is suspending his presidential campaign, saying he doesn’t see a way to the nomination. Castro, the only Latino in the primary, is a longtime ally of the LGBTQ community.

“It’s with profound gratitude to all of our supporters that I suspend my campaign for president today,” Castro wrote on Twitter.  “I’m so proud of everything we’ve accomplished together. I’m going to keep fighting for an America where everyone counts — I hope you’ll join me in that fight.”

Castro fought hard to rise in national polling but never registered above one percent. He also lagged behind other candidates in fundraising, announcing the end of his campaign on the same day candidates like Pete Buttigieg and Bernie Sanders are announcing record-breaking fundraising hauls.

His first moment of national attention came in 2012 when he delivered the keynote address at the Democratic National Convention. He joined the Obama administration in 2014 as Secretary of the Department of Housing and Urban Development (HUD), making him the youngest Cabinet member. He stayed in the position through the end of Barack Obama’s term in office.

Castro staked out pro-LGBTQ positions early in his career. As mayor, he served as grand marshal for San Antonio’s pride parade and successfully pushed for a city nondiscrimination ordinance. Castro also joined other big-city mayors in support of marriage equality.

For his support of LGBTQ issues, Republicans branded him “the lethal tentacle of Obama.” At HUD, Castro continued his advocacy; after his departure, he criticized the Trump administration for its policies, including its refusal to collect LGBTQ census data.

Castro was also the first presidential candidate to mention trans issues during a debate.