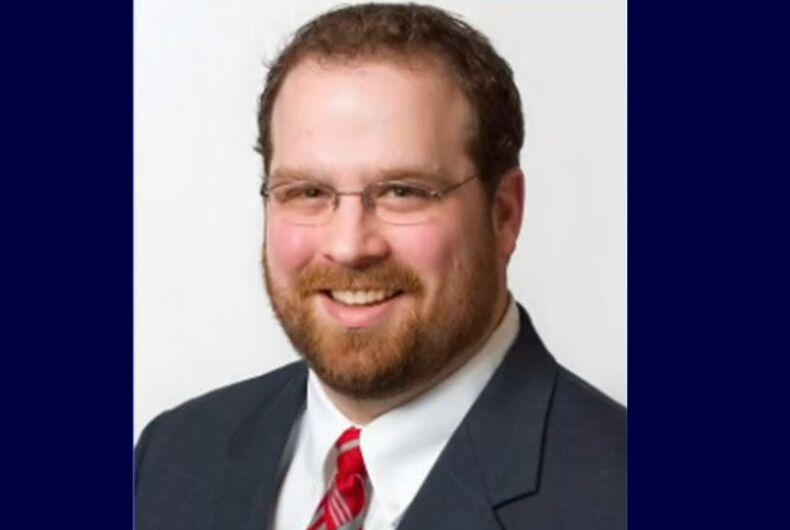 A Republican judge in Ohio is apologizing for extremely homophobic letters he wrote to his college newspaper.

Maumee Municipal Court Judge Dan Hazard wrote the vitriolic letters when he was a student at Ohio State University in 1992 and 1993, which came to light in a report on by Emma Henderson at WTOL.

“I have zero excuse and could not attempt to justify it then or now,” Hazard said in an apology he emailed to the Toledo Blade. “It was hurtful to anyone that saw it in 1993 or today. I am sorry that it will hurt even more people today including my gay and transgendered [sic] family and friends whom I love dearly.”

The first letter he sent to the Ohio State University Lantern was published in December of 1992. It opened: “My name is Dan Hazard and I am also homophobic.”

He referred to gay people as “savages” and used the word “citizens” in scarequotes when discussing gay people.

“I challenge anyone to name any civilized nation that looks at queers as ‘normal’ human beings. There just aren’t any,” he wrote.

“Homosexuals squeal for money and AIDS treatment. I suggest we cut all AIDS research funding (not AIDS education) because 95% of those inflicted with the deadly disease pretty much deserve it anyway (the homosexual community).”

The second letter was sent in 1993, just after that year’s March on Washington. He wrote: “I am writing to ask one question and hopeful to enlighten some of the heterophobes polluting this campus. Is the homosexual lifestyle a safe one?”

He cited the anti-LGBTQ hate group Family Research Council in stating that “the average life span of homosexuals dying from all [non-HIV] causes is 41,” which he called “good news.”

“Yet these immoral and unethical people continue to smother the other 99 percent of us (the heterosexual majority) with their propaganda presenting the homosexual lifestyle as a safe and normal one,” he wrote.

“I beg of the homosexual community one thing: Please keep your AIDS to yourselves. You have killed many innocent children, a few innocent adults (blood transfusions) and a number of not-so-innocent and irresponsible heterosexuals. Aren’t these deaths enough to draw attention to yourselves?”

The letters, which are archived on the Lantern‘s website, were recently reported on by local media.

“Throughout my career, I have befriended and represented many gay clients,” he wrote in his apology statement. “I have done so zealously without reservation. One of the first weddings I officiated after taking the bench was of a same sex couple.  I did so with respect and dignity. Every day I treat every litigant and attorney with that same respect no matter their background, experience or gender identity and will continue to do so.”

“I am glad that this allows me to clarify my views that have drastically changed over time.  Respect is owed not only in the courtroom, but in all of society.”

While the language in the letters is extreme by today’s standards, it was more common in the media up until the mid-2000s. A school newspaper would probably not publish his letters today, but at the time straight editors considered hate speech against gay people to be within the bounds of civil discourse on a political issue.

And even in 2020, news anchor at WTOL 11 Andrew Kinsey referred to the letters as “a column that some are calling homophobic.”

Hazard’s position is officially nonpartisan, but he is a registered Republican. He was elected to the bench in 2017.

Note: An earlier version of this article misspelled Andrew Kinsey’s name. We regret the error.

Bisexual Olympian says some opponents won’t shake his hand. He regrets coming out on TV.