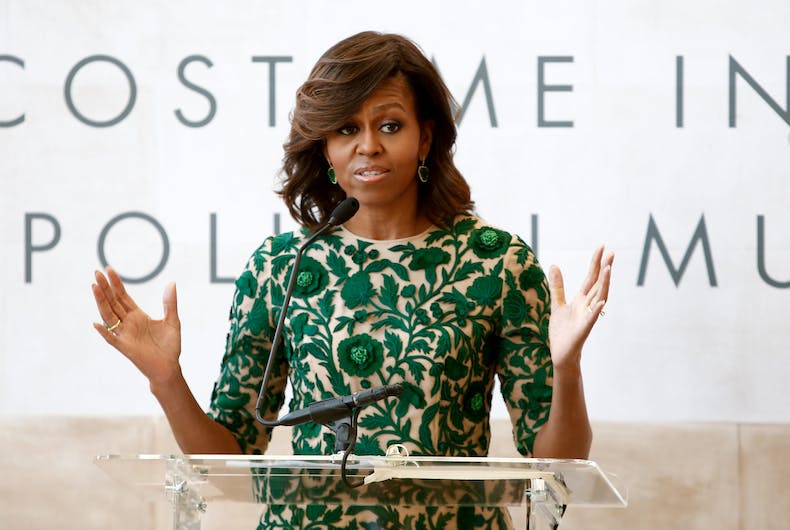 White evangelical Christians have been the Trump administration’s biggest supporters. Whether it’s unrepentant adultery, non-stop lying, destroying the Earth, abusing immigrants, or harming the poor, the far-right religious subset has gone all in.

Coincidentally enough, they also comprised a large percentage of Obama critics the believed and propagated wild conspiracy theories about our first black president and his family. But the latest claim may take the cake.

Francine Fosdick hosts the “Up Front In The Prophetic” radio show and during a recent broadcast she hosted a “prayer call.” About halfway through, she turned the call over to an “intercessor” only identified as Jamie.

An intercessor is a Christian term for someone who prays to God on behalf of a different person.

Jamie’s prayer was a little different. They prayed that former President Obama would be exposed as a sex trafficker and Michelle Obama would be revealed as transgender.

“I am asking you, Father, that the general public would see all of the stealing and all of the dirty things that Obama has been involved in,” Jamie prayed. “How did he get this $15 million home in Martha’s Vineyard? Father Lord, I’m thanking you that every bit of money laundering, that he is involved in child trafficking, all of that would be exposed.”

“Father, I thank you for exposing all of the corrupt book deals, not only Obama’s, but Joe Biden’s, Michelle’s,” Jaime continued. “And speaking of Michelle, today ABC just had an article saying that she’s been named the most admired woman in the world for the second year in a row. Father, I am asking you that whatever plan they have to have Michelle or Hillary [Clinton] run for president, we call that canceled in Jesus’ name.”

This isn’t the first time the far-right has claimed that the former First Lady is transgender. Conspiracy theorist Alex Jones has regularly promoted the nonsense on his InfoWars shows.