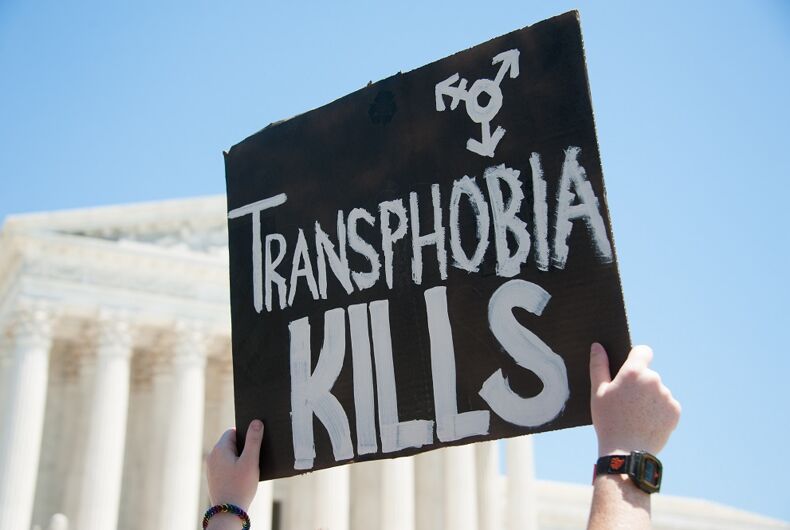 JUNE 25: A sign denouncing transphobia is held up in front of the U.S. Supreme Court at the March for Marriage in Washington, DC on June 25, 2016.Photo: Shutterstock

A columnist at the Denver Post says that he was fired because he used “mean spirited” language about transgender people, something that he agrees that he did but says he shouldn’t have gotten fired over it.

In a long rant posted to Facebook, Jon Caldara wrote that opinions page editor Megan Schrader found his writing to be too “insensitive.”

Related: Employees are quitting their jobs at Britain’s most liberal newspaper over transphobic editors

Caldara is the president of the Independence Institute in Denver, a libertarian think tank. He said that he was being forced to write “a soft voiced, sticky sweet NPR-styled piece which employs the language now mandated by the victim-centric, identity politics driven media.”

As a free-thinking man who is not a victim at all, Caldara was frustrated that his “free speech” was impeded when he was forced to use trans people’s pronouns and was told “to call what is plainly a man in a dress, well, not a man in a dress.”

He said that transgender issues were the “last straw” for Schrader. In a January 3 column, he said that the Associated Press was not telling the truth when it issued guidelines in 2017 to journalists about referring to non-binary people.

“There are only two sexes, identified by an XX or XY chromosome,” Caldara wrote. He did not say how journalists should obtain the DNA of the people they interview.

“That is the very definition of binary. The AP ruling it isn’t so doesn’t change science. It’s a premeditative attempt to change culture and policy. It’s activism.”

In his Facebook rant, Caldara directly addressed transgender people, who he said are “sovereign” and therefore can wear whatever they want.

“And so am I,” he wrote. “Which means YOU cannot choose my words. Our words are now chosen by the press, and our kids’ words are being mandated at school.”

He added that he has “friends, family, and employees from the LGBT community.”

“When people lack empathy, they can’t see that their words and actions inflict harm on others,” Rep. Brianna Titone (D) – the first transgender lawmaker in Colorado – said in a statement. “While many of us are working hard at trying to save lives by lifting people up, others continue to put people down with vitriol. Denying the existence of people who may be different by denying the chance for kids to learn doesn’t make us disappear. What it does do is it brings us together stronger.”

Schrader has not commented on Caldara’s termination of employment.

Batwoman snubbed Rachel Maddow when she came out in the press

Rep. Ayanna Pressley reveals she has no hair in a culture obsessed with black women’s hair