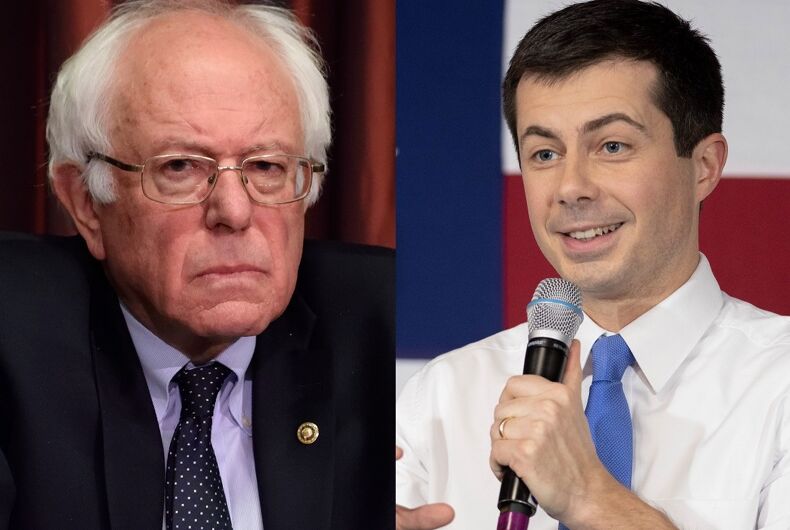 While presidential candidate Sen. Bernie Sanders (I-VT) has decried “dark money” in politics, Super PACs, and big money donations for years, it hasn’t stopped him from allowing a not-for-profit he founded to pour tons of money into the Democratic primary. Another group, tied to Rep. Alexandria Ocasio-Cortez (D-NY), has also been implicated.

Groups organized as a 501(c)(4) not-for-profit do not have to disclose their donors. Backed by unlimited donation amounts, the groups are able to secretly pour money into a race outside of government regulations that provide limitations to other groups and candidates’ campaign spending.

Sen. Elizabeth Warren (D-MA) and Sanders are generally considered the progressive candidates with a shot of winning the nomination; former South Bend, Indiana Mayor Pete Buttigieg and former Vice President Joe Biden are more moderate. The differences between the two camps have been on display during campaign speeches and debates.

But new reports show that groups with ties to both Ocasio-Cortez and Sanders have dumped hundreds of thousands of dollars into advertising and protests aimed at the two moderates.

Sanders, meanwhile, created the group Our Revolution. The group, formed to support his candidacy, also refuses to disclose donors and is pouring money into the battleground early primary states. Members of the group have heckled Buttigieg on the campaign trail.

At an event in Buttigieg’s hometown of South Bend, Indiana, over 100 members of the group held Sanders signs and accused Buttigieg of racism.

Questioned about Our Revolution’s under-the-table support, Sanders refused to deny his involvement or condemn the group for their activities. Instead, he said he’d “have no problem” if the group said where they’re getting the money to run the operation outside of the Sanders campaign.

Still, Sanders tried to deflect and accused other candidates of doing “the same.”

“You’ve got groups all over the country that legally can do what they want. And I would be very happy to say and to urge an end to all that if other candidates do the same. So I am not in favor of these things,” Sanders said in an interview on New Hampshire Public Radio.

Until then, the groups will continue to dump armloads of secret cash into the primary election with Sanders’ blessing. Our Revolution alone raked in over $2.7 million in 2018 alone. The group had 15 major donors and has refused to reveal who they are.

Justice Democrats and Organize for Justice were created by former staffers of Sander’s 2016 presidential run.

Dark money is used to manipulate electorates. It is the enemy to democracy. Period.

When politicians and corporations weaved their dark web of campaign finance, they created a ticking time bomb for foreign adversaries.

To make our democracy safer, we need to get big money OUT. https://t.co/OYX62jboZH