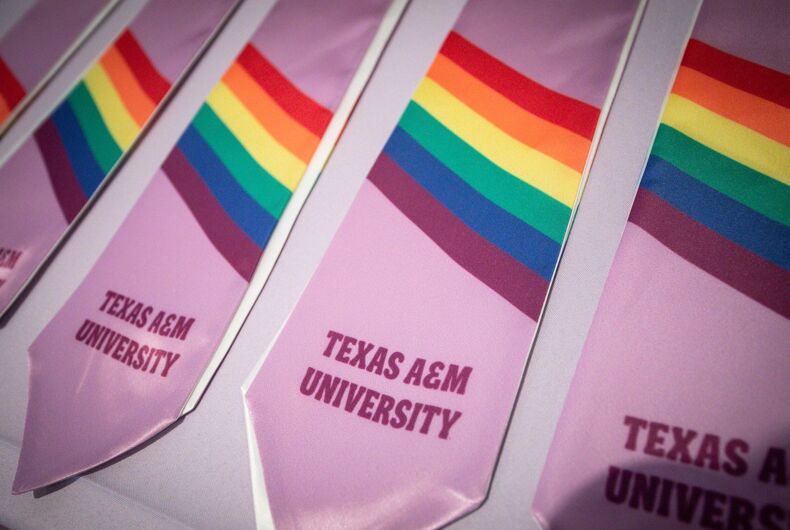 A Stole with the rainbow LGBTQ Pride flag, from Texas A&M University.Photo: via Facebook

Texas A&M was ranked consistently on Princeton Review’s list of “Unfriendly schools for LGBT students” from 2009-2015. People that live near its College Station campus sometimes referred to it as “Closet Station.”

Marcus Watkins is among those who started attending A&M during this period. One day in October 2019, he went out with two friends. While waiting in line for The Backyard, a bar in the nearby Northside District, Watkins noticed the bouncer let a girl in front of him in for free. The next man in line stepped forward to hand the bouncer his ID, and paid $10.

When Watkins did the same, the bouncer said it was $20. Wearing a black v-neck with a red flannel shirt and jean shorts, the college student stood there puzzled and asked why. The bouncer simply replied, “circumstances.”

Watkins refused to pay the $20 and has not returned to Northgate since – now, he prefers Downtown Bryan, TX. “That’s where the gay club is,” Watkins said. “I love it down there.”

Watkins said he was nervous at first to attend the public research university. “I remember looking at A&M in 2011 and saying, ‘Wow this is a very scary environment for many people,’” said Watkins. Watkins’ experience has made him feel like the community had gone back in time, a sentiment shared by many in the student body of Texas’ largest institution.

Kat Gammon, who belongs to the Class of 2012, said she also remembers feeling unsafe around Texas A&M’s campus while she attended the university. “I did not feel safe as an LGBT person being at Northgate,” she said. Gammon, a psychology graduate of the college and female-presenting lesbian, chose to stick to Downtown Bryan – she felt that Northgate was like an extension of campus.

Gammon, who identifies as a female-presenting lesbian, said she realized what she would face at the university, having moved to the conservative community in 2000. It is still uncommon to see outward affection between same-sex couples, like holding hands, but Gammon said as a lesbian, she could get away with it a little easier than men could.

In 2010, a LGBT student was called a slur at the Midnight Yell, an Aggie tradition. “The reality is, gay, lesbian, bisexual, and transgender students feel unsafe and unwelcome at Texas A&M,” Camden Breeding wrote in the Dallas Voice at the time.

In 2013, the desired exclusion of LGBT students became clear. The Texas A&M student senate passed a bill to allow students to opt-out of funding for the GLBT Resource Center (now known as the LBGTQ+ Pride Center) for religious purposes, according to coverage of the event by The Eagle, a daily newspaper for the Bryan-College Station campus. Originally, the bill was titled “GLBT Funding Opt Out Bill” and later became “The Religious Funding Exemption Bill.”

The co-author of the bill claimed at the time of the vote there were no ties to religious organizations and figures in the bill, but opponents argued the bill was still discriminatory to students based on their sexual orientation and embarrassing for Texas A&M, according to the school paper.

Gammon was among the opponents. “I protested at one of their meetings,” she remembered about the events. “The student that was calling the names of certain council members actually started crying as each vote for this bill came in.”

Despite the efforts of LGBTQ people and their allies, the bill passed with 35 votes to 28.

The next day, however, the bill was vetoed by John Claybrook, then-student body president. This would end up serving as a turning point, not in favor of conservatives and religious freedom advocates, but for LGBTQ students and non-discrimatory Aggies. Four years later, the student body would elect its first gay student president – Bobby Brooks, considered the “first openly gay man to lead at traditionally conservative campus. In recognizing Brooks, the Houston Chronicle spoke about “Closet Station”, the name that came to represent one of the nation’s largest campuses and its relationship with LGBTQ people.

While change did not come overnight, both the student body and administration slowly began to work toward ending the institutional discrimination in place at the school. As Gammon points out, as society became more accepting, the rest of A&M had to follow.

“I think A&M has had to grapple with the issue of diversity and diversifying its student body in a number of ways,” said Tasha Dubriwny, Ph.D., associate professor of communications and women and gender studies who has instructed at Texas A&M since 2007. “I think for some old Ags, that’s really hard,” she added.

In 2018, two resolutions were proposed by then-student senator Zach Huebschman in support of the LGBTQ community at Texas A&M, which included an endorsement for the school’s LGBTQ+ Pride Center, the LGBTQ Aggies student group, and regulation of staff and faculty so they support students of a different sex or gender. This included provisions to build gender-neutral bathrooms and sponsoring an A&M Aggies float in Houston’s Pride Parade.

The resolutions passed. Now, the LGBTQ students have had a drastically different experience in their years at A&M and in the area.

Now, many official festivities and events like Pride tailgates, holiday parties, and lavender graduation for the LGBTQ students, are organized every year on campus. The LGBTQ+ Pride Center works a welcome space and encouragement of all students to be successful at A&M, according to the coordinator, Tori Jackson.  They also help students in search of psychological, medical or community-based services.

“Our ultimate goal is for students at A&M, whether they be community members or not, to feel supported and like they have somewhere to go,” Jackson tells us.

Gammon endorsed the Pride Center, saying she always felt welcome there and could walk in anytime. The center is important for support to LGBTQ students, she added, because many students lack support from home.

Luke Granger, a freshman at Texas A&M who identifies as bisexual, said he was surprised by the results of his cross-dressing on Halloween, as he was unsure of how the conservative community would react. “It ended up being a good experience, and it showed me that most people are indifferent,” said Granger. “There might be some people who are assholes, but for the most part I think they are a vocal minority.”

Texas A&M is not 100% accepting of the LGBTQ community, according to Adrian Jasso, a business major. “Speaking for myself, I feel accepted because they tolerate me,” said Jasso. “It’s one step to progression.” He views the LGBTQ+ Pride Center as a double-standard because it no longer has provisions to work with straight allies on campus, suggesting they become more of a gay-straight alliance.

For trans and gender queer individuals, “there is counseling specific to transitioning as part of the health and psychological risks and benefits,” said Tiffany Skaggs, M.D., chief of the medical staff at the on-campus provider of student health services. “…We also offer general counseling just about gender dysphoria, mood disorders, stuff like that,” but not anything such as affirming surgery, which would be referred to an outside clinic or specialty doctor.

Whilst it is still a fundamentally conservative school, Texas A&M has made a significant, quick swing from a place unfriendly to LGBTQ students to more affirming than many other schools. Watkins believes he would not have attended Texas A&M as it was five years ago, but he agreed it has changed and believes that the progress made in recent years “is amazing.”

There is still, of course, progress to be made. After all, some people are being treated differently – such as Watkins, at that off-campus bar in October. The positive is that it’s no longer an open, widespread effort by organizing forces on campus, if there’s any effort at all.

After being at the top of the Princeton Review‘s anti-LGBTQ list, Texas A&M has failed to be included for the last four years – and running – with pride.

Editor’s Note: We mistakenly referred to the LGBTQ+ Pride Center by its former name, which was changed, and asserted that they hosted certain events at Texas A&M. We have corrected the information for accuracy.