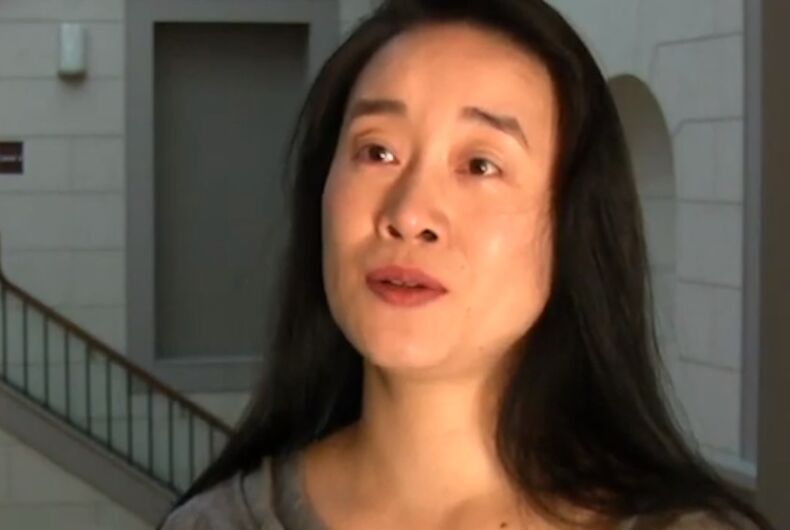 Rie Hachiyanagi, a 48-year-old former art professor now on a leave of absence from Mount Holyoke College after being accused of trying to murder her unnamed elderly colleague.Photo: Video screencapture

Rie Hachiyanagi, a 48-year-old art professor at Mount Holyoke College in Massachusetts, has been charged with attempting to murder an unnamed female co-worker over the age of 60 with a rock, a fire poker, and garden shears after the colleague didn’t return Hachiyanagi’s romantic advances. The alleged attack occurred in the early morning hours of Christmas Eve.

Hachiyanagi has been charged three counts of assault and battery with a dangerous weapon, mayhem, and armed assault. The attack left her victim with multiple broken bones in her nose, around her eye area, and many tears and puncture wounds on her head and face, according to Daily Hampshire Gazette. Hachiyanagi has pleaded not guilty.

Related: Man arrested for strangling trans woman to death with her own hair

Hachiyanagi reportedly drove to the victim’s house uninvited to “talk about her feelings.” Once inside, Hachiyanagi confessed that she had loved the victim “for many years.” But when her victim said she didn’t feel the same, Hachiyanagi began attacking her with whatever weapons she could find nearby.

After a while, the victim lied and said that she actually shared Hachiyanagi’s romantic feelings but wanted to call an ambulance to get medical attention for her injuries. Together, they decided to tell authorities that Hachiyanagi had discovered the victim “lying in a pool of blood and barely breathing” after being attacked by an anonymous intruder.

When police interviewed the victim at the hospital, she told them that Hachiyanagi had actually attacked her.

When questioned by police, Hachiyanagi reportedly said that past concussions had given her sporadic memory loss and that she didn’t remember anything that had happened since Dec. 23. Police found the victim’s keys, glasses and a mobile phone in Hachiyanagi’s possession at the time of her arrest.

Hachiyanagi, who came to the U.S. as a high school exchange student from Japan, specializes in art installations and sculptures using paper and string.

Evangelicals are praying that God “exposes” Michelle Obama as transgender