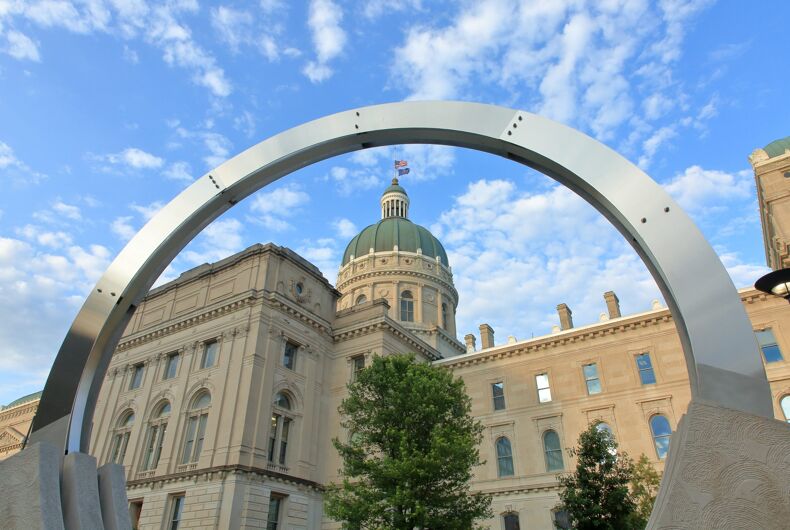 Indiana State Capitol building which is home to the all three branches of government, that is the Senate, House,and Supreme Court - Indianapolis, IndianaPhoto: JustPIXS / Shutterstock

The 7th Circuit U.S. Court of Appeals ruled on Friday that it is unconstitutional for the state of Indiana to deny parenthood to parents in a same-sex relationship. In Henderson v. Box, the state of Indiana and its health commissioner was sued by several couples for refusing to recognize one of two mothers on their newborns’ birth certificate.

The case was filed in 2015, and a lower district court ruled in 2016 in favor of the same-sex couples. The state of Indiana appealed to the 7th Circuit. By the time they heard the case, denial of same-sex parents on birth certificates was already deemed unconstitutional by the U.S. Supreme Court in Pavan v. Smith, ruled on in 2017.

Related: How a transgender dad won the right to be the legal father of the child he carried

A panel on the court, consisting of three conservative appointees, took nearly three years to concur that Indiana’s similar discrimination was illegal. The 7th District – headed by Chief Justice Diane Wood, who has ruled in favor of several LGBTQ-friendly decisions – usually takes 3 months to deliver decisions. This time, it took a portion of the court 970 days – 31 months, 26 days –  to publish a ruling.

One couple that was a plaintiff in the case, Jackie and Lisa Phillips-Stackman, had a child with a rare chromosomal disorder. They were at risk for losing health insurance coverage for their child if the 7th Circuit did not rule in the favor. There was also fear that legal problems would arise for them if something happened to their child, due to the delay in the ruling. Following the lower court’s siding with them, Jackie and Lisa carried copies of their child’s birth certificate every day in case they had to “prove” their parenthood.

“Delaying a decision by years when there is controlling precedent from the Supreme Court is nothing short of bizarre,” Law professor Anthony Michael Kreis told Slate earlier this month, when the decision had yet to come down. One of the plaintiff’s attorneys, William Groth, also said that “This extraordinary 32-month post-argument delay… is unprecedented. It’s harmed our clients by causing them needless stress and anxiety.”

Indiana’s argument was that the children of same-sex couple, regardless of the couple’s marriage status, were born “out of wedlock.” Prior to Pavan v. Smith, one of the parents in same-sex relationship would have to ‘adopt’ their child to have any legal recognition as a parent – even if they’re biologically related. In contrast, different-sex couples would be recognized on their child’s birth certificate, even if they weren’t biologically related, and regardless of their marriage status.

Now, two parents of the same sex can be recognized on birth certificate, and they won’t have to go through that adoption process.

“It’s a great day for the children and their parents,” said another of the plaintiff’s attorneys, Karen Celestino-Horseman. “Their families have been affirmed.”

The ruling, written by Frank H. Easterbrook, did not completely affirm the lower court’s decision  though. It noted that ‘fathers’ may still have legal rights to children in ‘female-female’ relationships, but they could not address that as “no biological father is a litigant” in these cases.

“…this appeal depends on the resolution of a dispute about the meaning of Indiana law. Once we decide who is right about the state’s system, the outcome follows from Pavan,” Easterbrook’s decision reads. The order “requiring Indiana to recognize the children of these plaintiffs as legitimate children, born in wedlock, and to identify both wives in each union as parents” is affirmed, however.

Easterbrook also noted that the issues were rooted in Indiana’s laws, written prior to the legalization of same-sex marriage, and that the legislature was responsible for addressing these issues.

“There’s a deeper problem…all of the contested statutes were enacted long before Obergefell and Pavan,” Easterbrook wrote. “They are products of a time when only opposite-sex marriages were recognized in Indiana. There’s nothing a court can do to remove from the state’s statute books provisions assuming that all marriages are opposite sex.”

Indiana’s argument that their state laws governing birth in the state require a mother and father on state documents was shot down in the ruling as well. “The state wants us to treat this form, rather than [Indiana Codes], as the governing rule,” the decision read.