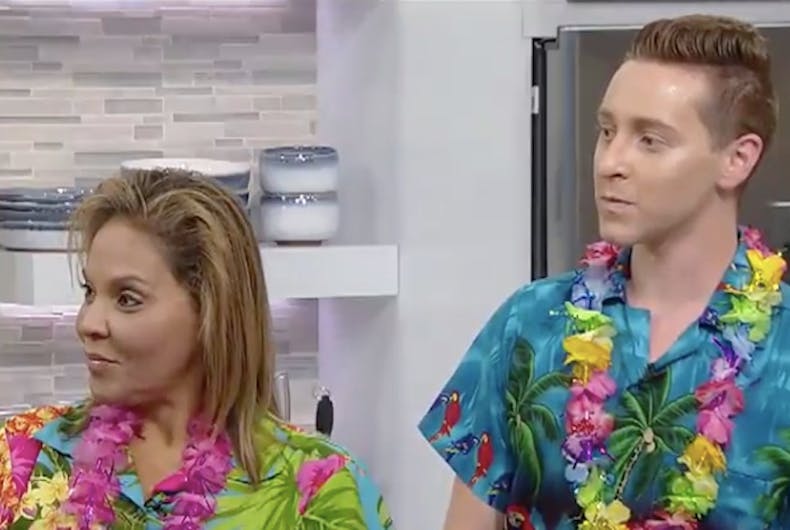 Anna Bran-Leis, the owner of Taqueria Del Barrio, and one of her employeesPhoto: Fox 5 DC screen capture

Washington D.C. residents are rallying around a local taco shop that has been targeted by threatening calls from anonymous homophobes and white supremacists.

Anna Bran-Leis, the owner of Taqueria Del Barrio in the Petworth neighborhood says her business has received dozens of phone calls voicing “aggressive” homophobic insults. The callers have threatened to kill the largely LGBTQ staff and burn down the business.

The owner believes the threats may be connected to the taco shop’s monthly drag queen brunch and its drag trivia night, reports The Washington Post.

The calls reportedly started on December 12 and intensified on the following Sunday and Tuesday, the days on which the brunch and trivia night take place. The Mexican restaurant received over 30 calls each day “from four different phones with different voices.” The calls prevented other callers from making reservations.

When an employee called one of the numbers back, it connected to the voice mailbox of a north Virginia white supremacist group. As the calls intensified, Bran-Leis contacted police and detectives took the caller’s phone numbers and voice recordings.

Although the brunch and trivia nights generate a massive amount of business for the taqueria, one employee felt so scared by the threats that they missed a day of work in fear for their safety.

The local website Popville is encouraging people to support the restaurant by visiting and ordering its food online. Popville mentioned that the community similarly supported the gay-owned Comet Ping Pong pizzeria after it was targeted for homophobic violence in late 2016.

On December 5, 2016 Washington D.C. police arrested 28-year-old Edgar Maddison Welch after he entered the pizzeria with an assault rifle and fired at least one shot. He went to “self-investigate” unfounded #Pizzagate rumors that Comet Ping Pong was part of a child molestation ring involving Hillary Clinton and had children imprisoned in its basement (which doesn’t exist).

The pizzeria’s owner James Alefantis is a gay man. Anti-gay protestors have also demonstrated outside of the pizzeria.