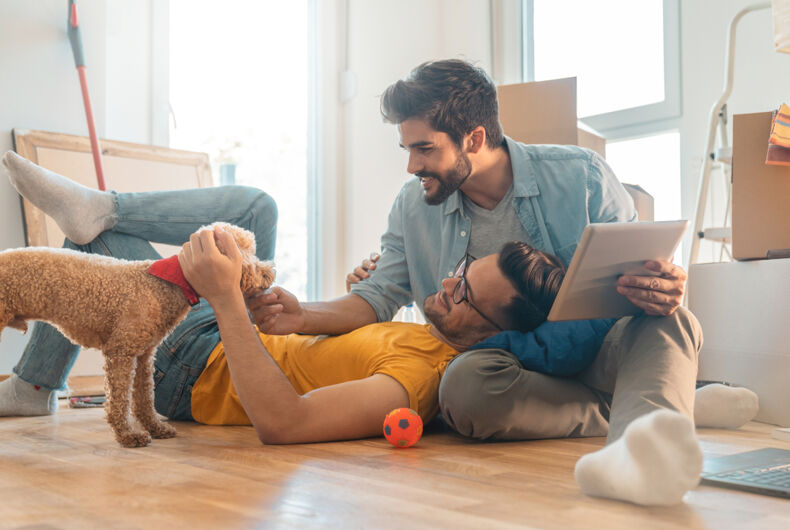 Gay and bi couples who have dogs in their lives may fare better under the holiday stress this season than those who don’t.

According to a recent study, two-thirds of gay and bi couples who have adopted dogs say doing so has strengthened their relationship.

The study revealed that 56 percent of couples with dogs spent more time together. The website’s study analyzed the romantic relationships of dog owners for the report.

They also found that participants viewed dog ownership as a stronger sign of commitment than opening a joint checking account together.

Dog people seek out other dog people, the study revealed, sometimes to exclusion. More than a third of study participants, across all sexual orientations, said they would not consider a romantic partner who did not describe themselves as a “dog person.”

To illustrate just how valuable dogs are to gay and bi people, the study also showed that 21 percent of couples had established so-called “pet-nups” in case their relationships soured or ended in separation. Only 12 percent of straight participants reported having such agreements in place.

Our hetero friends might want to reconsider this position. Rover.com’s resident expert, Louis Glazebrook, says having a “pet-nup” is a practical approach for those couples considering adoption.

“You can outline the practicalities of what would happen in the event you split from your partner whether you have joint or sole custody,” said Glazebrook. “It’s a real tragedy to see breakups results in dogs needing to be re-homed.”

We’re never too sad coming home from a trip when we get to reunite with this little guy 🐶 After a crazy travel journey home from Panama, we spent a busy couple of days in Vancouver. We picked up Theo, unpacked, and then repacked and got ready to leave again! Even though we don’t spend 100% of our time on the road, we still consider ourselves full-time travellers because we don’t have a permanent home. Both of our properties serve as rentals and income generators, and most of our things are packed up in boxes in various locations 😂 That being said, home is so many places for us. And this weekend we swapped one home for another. Leaving our condo in Vancouver for our house in Niagara Falls, and bringing this little cutie along for the ride. We’ll be out in Ontario for the next month, and we’re so excited! We can’t wait to do some work around the house, see some friends and family, and get as much work done as we can before slowing down for the holidays 🥰 Photo by 📸 @danilouisephoto #lezseetheworld

While the benefits of dog ownership are many, the study did present some downsides as well.

Seventeen percent of the couples participating in the report also noted a decrease in their sex lives due to sharing a bed with their pooch.

A former Olympian just compared drag to blackface, but is she right?