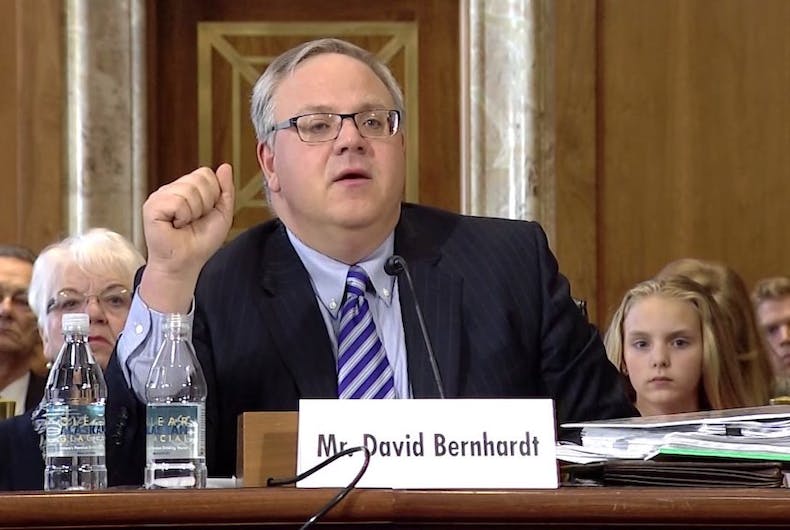 David Bernhardt, the Trump-appointed Secretary of the U.S. Department of the InteriorPhoto: YouTube video capture

The Trump Administration has quietly removed sexual orientation protections from the U.S. Department of the Interior’s (DOI) guidelines on workplace discrimination. The official explanation of why contradicts an anti-LGBTQ argument being made by Trump in several court cases.

While sexual orientation was explicitly covered by the DOI’s 2009 workplace discrimination guidelines under the Obama Administration, it has been removed in the 2017 version. Danko says that any worries about its deletion are “a non-story seeking controversy where none exists.”

However, Danko’s comment directly contradicts at least three 2019 Trump administration Supreme Court briefs which argue that it should be legal to fire people for being LGBTQ because Title VII doesn’t cover such mistreatment under its prohibition of sex-based workplace discrimination.

Thus far, the EEOC believes that discrimination based on sexual orientation or gender identity are forms of sex discrimination because they’re based on stereotypes of how men and women should behave. That is, if a woman is fired because she married a woman but wouldn’t have been fired if she were a man married to a woman, then she lost her job because she’s a woman.

But because the Trump administration opposes civil rights protections for LGBTQ people, its brief argues that a woman fired because she is married to a woman should be compared to the treatment a man married to a man would receive, and if they would both be fired then that’s sexual orientation discrimination, not sex discrimination. The briefs further elaborate that legislators in 1964 never meant to include sexual orientation or gender identity under the Civil Rights Act’s definition of “sex.”

While an April 2018 DOI bulletin on workplace discrimination explicitly mentions sexual orientation, the Human Rights Campaign’s associate legal director Robin Maril said the removal of explicit protections from the 2017 guidelines still “sets a tone” at the department and “sends a dangerous signal to workers and supervisors that non-discrimination protections are no longer a priority.”