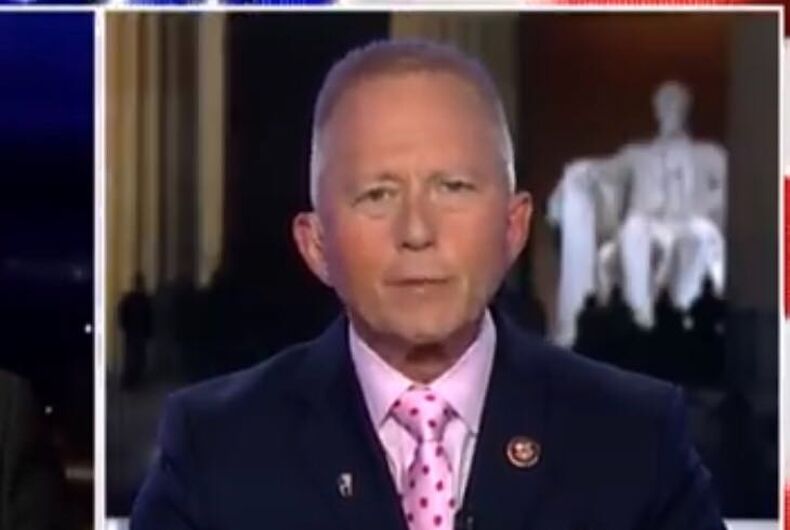 As rumors have rummaged in the halls of the Capital for nearly a week, it’s now confirmed by several sources that Representative Jeff Van Drew of New Jersey is going to align himself as a Republican, cementing his decision to oppose Democrats in the impeachment process.

Van Drew now becomes only the second Republican in Congress for the Garden State, which is otherwise completely Democrat-led at both the state and federal level, due to a blue wave there as of late. Van Drew is already reportedly unpopular among his constituents, and last month on a conference call he pledged not to jump lines despite his opposition to the party line of focusing on impeachment efforts.

Now, the New York Times (among others) is reporting that Van Drew has already informed staff that he will publicly declare himself a member of the GOP as soon as next week. This follows a week of much-rumored courting by conservatives and a Friday meeting with President Trump, in which Van Drew was given the “blessing for the move” and “encouraged” to jump across party lines. Meanwhile, state Democratic leader spent the weekend trying to reach him to no avail. Trump tweeted Congressman Van Drew with thanks for ‘being honest’.

Thank you for your honesty Jeff. All of the Democrats know you are right, but unlike you, they don’t have the “guts” to say so! https://t.co/OUc46HUwPq

A major factor that may have pushed the representative to change his mind on being a Democrat was a poll his staffers received that suggested that 71% of his district’s Democrats would have voted against him in the 2020 primary if he chose not to support impeachment of Trump. A Washington Post inquiry poll also found a majority believing Van Drew’s seat should go to another Democrat. This follows the last election cycle in which all 3 local candidates Van Drew supported lost to their opponents, signaling his lack of influence with voters. He has endorsed current New Jersey Sen. Cory Booker in the 2020 Presidential election, and he’s not too hot at the polls, either.

Sources claim that Van Drew wants to have his public announcement on Wednesday, aligning around the same time that the vote for issuing articles of impeachment comes down – to which Van Drew is vehemently opposed to moving forward with, the central issue prompting his change in allegiance.

As the Democratic Party moves further left, Van Drew – a dentist representing the state with the most millionaires in the country – may be looking to boost his popularity and his “own political fortunes,” as the Times’ Jonathan Martin and Nick Corasaniti writes. He was an unpopular moderate in a district where he was expected to be challenged and defeated in next year’s primaries. Being a Republican will allow Van Drew to enter his next election virtually unopposed in the primary, and possibly with the embattled President’s support in the general.

Jeff Van Drew voted right of the Democratic Party and his district on crucial votes about as much as any Democrat. Him becoming a Republican is no big loss. Dems can do better than him. Yes, even in a swing district.

In 2012, as a state assemblyman, Van Drew voted against a same-sex marriage approving resolution, which ultimately passed. ““I deeply respect the civil liberties and rights of all New Jerseyeans, but I also believe that marriage over the centuries has been unique between a man and a woman,” we reported him as saying at the time. In 2013, Local advertising PAC ‘New Jersey Family First’ mailed out postcards boasting of Van Drew’s anti-same sex policies, while detracting from his opponent – a Republican – who supported it.

He also voted against raising the minimum wage in New Jersey, carried a A rating from the NRA in 2018, and pledged not to support Nancy Pelosi as the representative for House Speaker, a title which Pelosi ultimately retained. He caucuses with the ‘fiscally conservative’ Democrat group Blue Dog Coalition.

On September 25, he appeared on Tucker Carlson’s show on Fox News to explain why he wouldn’t be voting for impeachment. When Carlson says that “the easy thing” would be to “follow party leadership” and go along with impeachment, Van Drew replies that he’s “never been good at that to begin with.”

“In addition to prioritizing his political career over the direction of the country, Congressman Van Drew is also a traitor to his voters,” Montclair State political professor Brigid Callahan Harrison, a potential candidate to replace Van Drew, said recently. She would have challenged the incumbent in the primary, but now, she’ll likely be aiming to take him on in the general election instead. ““Jeff Van Drew has chosen his political career over our Constitution,” New Jersey Gov. Phil Murphy said in a statement to The Washington Post on Saturday before taking to Twitter.

.@CongressmanJVD has chosen his political career over our Constitution. Despite knowing full well that the President has abused the powers of his office, he's now willing to enable Donald Trump just to try to salvage his own election.

Van Drew was expected to be one of two Democrats opposing impeachment, leaving Rep. Collin C. Peterson as the only House member in blue to not stick to the party line. For his part, Van Drew refused to make any comments, but his campaign did send out an email to followers on Saturday inviting them to contribute to a fundraiser – benefitting him and “other freshman Democrats” who “are facing incredibly difficult re-election campaigns.” His twitter bio also read at time of publication, “Republican or Democrat – We are all American.”

Dear youth, keep challenging the systems of power – no matter who tells you to ‘chill’.