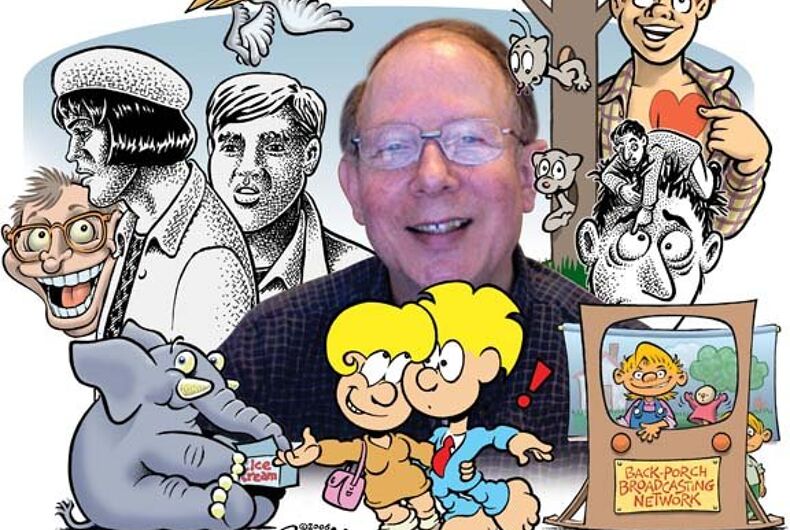 Howard Cruse, a pioneer in the LGBTQ cartooning movement and the author of Stuck Rubber Baby, an award-winning graphic novel about the intersection of race and sexuality in the South, died on Tuesday, November 26. He was 75.

His husband of 40 years, Ed Sedarbaum, said that Cruse succumbed to complications from lymphoma at Berkshire Medical Center in Pittsfield, MA. Cruse, who lived in Williamstown, Ma., had been diagnosed in August.

Cruse’s masterwork, the bold graphic novel Stuck Rubber Baby, was published in 1995. It was based on Cruse’s interior struggles as a closeted gay man during the civil rights era of the 1960s. Widely translated, Stuck Rubber Baby has won numerous awards, including a critics prize at the Angoulême International Comics in France, the Harvey Award, Eisner Award and United Kingdom Comic Art Award for Best Graphic Album.

Stuck Rubber Baby will be reissued in a 25th anniversary edition by First Second Books in May 2020.

Howard Russell Cruse was born May 2, 1944 in Birmingham, Alabama, as the younger of two sons born to Clyde and Irma Cruse. The family moved to Springville when his father, a photojournalist, was ordained as a Methodist minister and assigned to Springville Methodist Church. Cruse’s creative talents were encouraged by both his parents.

His first published work was a 1959 comic strip called “Calvin” in the St. Clair County Reporter. Young Cruse also had cartoon art published in the humor magazines Fooey and Sick. He was mentored through an ongoing correspondence with famed cartoonist Milton Caniff, the creator of “Terry and the Pirates” and “Steve Canyon” newspaper comic strips. At age 16, Cruse was invited to visit Caniff in New York City.

At Birmingham Southern College, Cruse became involved in the theatre program, designing sets and appearing In several productions. He wrote and directed his own play during his senior year. For the college literary magazine, Quad, Cruse satirized the conservative organization the John Birch Society. The controversial work appeared in print, but the faculty advisor insisted on running a full-page disclaimer.

After graduating from BSC in 1968, Cruse joined Birmingham’s WBMG-TV as art director and a puppeteer on “The Sergeant Jack Show.” At this time, he became romantically involved with a man, Don Higdon, for the first time.

During this time, Cruse created “Tops & Button,” a cartoon panel about two squirrels, which ran daily in The Birmingham Post-Herald from 1970 to He also created the subtly subversive comic strip “Barefootz,” which debuted in the University of Alabama’s newspaper Crimson White. “Barefootz” would appear in several Birmingham-area publications during the decade, and later in underground comic books.

In 1977 Cruse relocated to New York City to make cartooning his full-time profession. In 1979, he met Eddie Sedarbaum and they moved in together. The couple was married in 2004.

Cruse’s career reached a personal and professional breakthrough in 1980 when he was founding editor of Gay Comix, an underground anthology for lesbian and gay cartoonists. Cruse’s own work, exploring his conflicted childhood and repressive Southern upbringing, appeared in these comic books.

In an era before the formal passage of LGBT rights, these frank cartoon explorations of gay culture, politics, sex, and camp had a huge influence on young people in the closet. During the four years of his editorship, Cruse received letters of gratitude from readers all over the country, many who had considered suicide. During this period, Cruse did many pro bono illustrations to support fledgling LGBT organizations, as well as mentoring of young queer cartoonists. Cruse created a high-profile poster about gay male safe sex practices in 1985 for New York City’s Gay Men’s Health Crisis.

Cruse’s profile as a cartoonist grew with the debut of “Wendel,” a comic strip about a gay everyman, his lover, friends and family. It appeared in the national newsmagazine The Advocate from 1983 to 1989. He also contributed frequently to The Village Voice. Cruse and Sedarbaum became active in LGBT and AIDS grass-roots politics, joining the direct-action organizations ACT UP and Queer Nation.

Cruse and Sedarbaum left New York City in 2003 and moved to Western Massachusetts, settling first in North Adams and then Williamstown.

Cruse frequently appeared at comic book conventions over the decades, and was the guest of honor at academic and fan conferences, especially those addressing the subject of queer comic art. His final published comic work appeared this year in Northwest Press’s horror anthology “Theater of Terror: Revenge of the Queers.” Cruse was among LGBT cartoonists and illustrators appearing in the documentary “No Straight Lines,” scheduled for a 2020 release.

In addition to his husband Ed Sedarbaum, Cruse is survived by his daughter, Kimberly Kolze Venter, and his brother, Allan Cruse.

Donations in his memory can be made to New York City’s LGBT Community Center, the Queers & Comics Conference, and Rainbow Seniors of Berkshire County.

Memorial services, open to the public, will be held in Berkshire County, Massachusetts, and New York City in the near future.