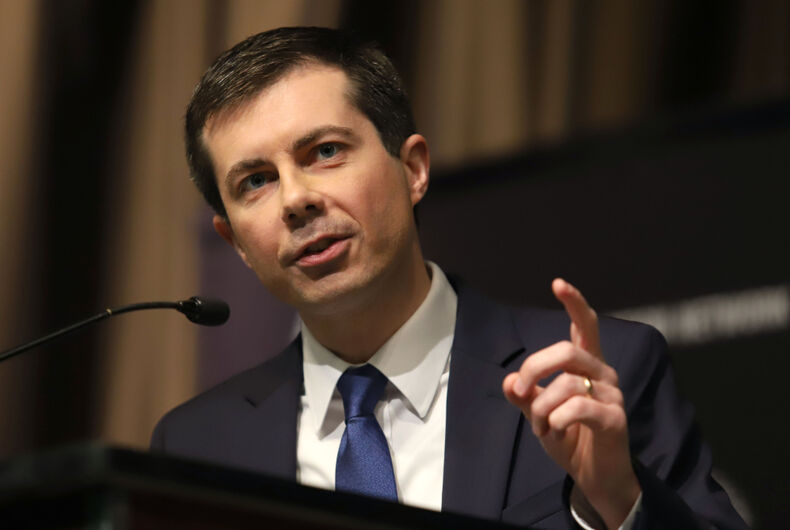 Pete Buttigieg has made a point of trying to reclaim religion from the right wing. So it wasn’t surprising that his Christmas tweet focused on religion, with a bit of a political message to boot.

On December 25, he tweeted “Today I join millions around the world in celebrating the arrival of divinity on earth, who came into this world not in riches but in poverty, not as a citizen but as a refugee. No matter where or how we celebrate, merry Christmas.”

The temerity of a gay man tweeting about the nativity while criticizing the president’s cage-the-kids policy was just too much for Trump supporters. They promptly began taking Buttigieg to task for just about everything in the tweet.

Today I join millions around the world in celebrating the arrival of divinity on earth, who came into this world not in riches but in poverty, not as a citizen but as a refugee.

No matter where or how we celebrate, merry Christmas.

First came the fact that Buttigieg didn’t mention Jesus by name. For folks who sprinkle Christ’s name in conversation like confetti on New Year’s Eve, that oversight had demonic implications.

“Can’t risk saying the name ‘Jesus Christ’ without bursting into flames?” one person responded. “Most Luciferians don’t like to hear his name or say it,” claimed another. (The Washington Post noted that Buttigieg doesn’t mention Jesus when he talks about his faith.)

But the real argument came over Buttigieg describing the Holy Family as refugees. If you listen to his conservative critics, Jesus came from a comfortable middle-class family with citizenship status. “Son of a carpenter, literally from King David’s bloodline and a Roman citizen. Not poor, not a refugee,“ another respondent wrote.

That was the mild criticism, compared to the rants that applied 21st century politics to events of two millennia ago.

“#Jesus was a citizen and nationalist too!” someone wrote. “The nine months pregnant girl was forced to make a 9-10 day trip on the back of a donkey to pay their taxes to an out of control obtrusive government. Exactly what today’s radical left will impose given the chance,” another political Christian complained.

“Dipstick: Jesus was NOT a ‘refugee,’” another wrote. “He was a victim of big gubment taxation policies that forced a pregnant woman to travel 90 mi. to make sure her family paid their taxes. This is EXACTLY what you wish to impose, sporksnorkle.”
The spittle-flecked responses to Buttigieg reflect more than just arguments over interpretations of the Bible. (Contrary to those complaining, there are different ways to read the text, and on some topics, like Joseph’s income, Scripture is silent.)
The complaints reveal yet again just how much politics and religion are one and the same for a lot of Trump supporters. Having had the field to themselves for so long, they are outraged that someone is trying to reclaim religion from the left.
As for the spirit of forgiveness and understanding that the season supposedly represents — well, apparently that is no longer part of the Christmas narrative.
Commentary
Election 2020, evangelicals, Pete Buttigieg, Refugees, Religion, religious right

A former Olympian just compared drag to blackface, but is she right?

What is asexual? Here’s the asexual spectrum, an asexual quiz & everything else you’re curious about