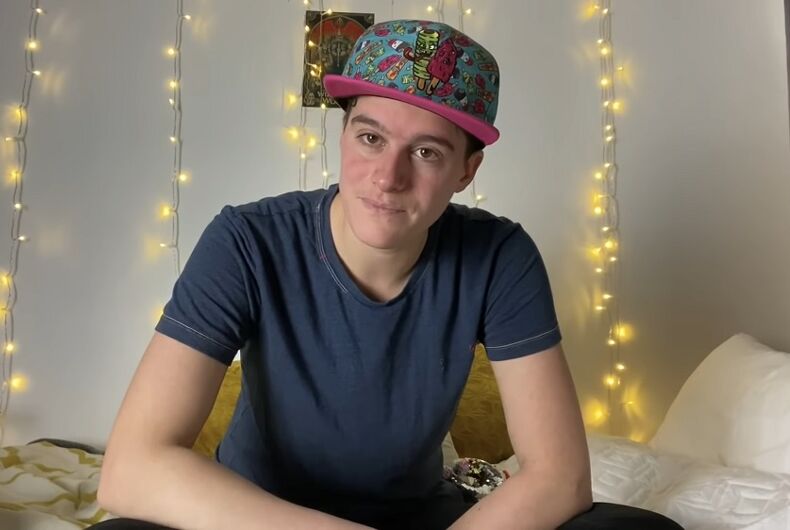 Non-binary model and activist Rain Dove confessed to building an enormous web of lies about their life – from falsely claiming that they had a degree from the University of California at Berkeley to lying about accepting money from TMZ for text messages that implied that actress Asia Argento sexually assaulted a minor – and is now unable to explain inconsistencies in several viral stories they shared over the last couple of years that involved transphobia.

Dove posted an hour-long video to YouTube this past weekend entitled “EXPOSING MYSELF: Sharing Lies & Secrets.” They said that they made the video because people need to “be honest with ourselves and others, forgive ourselves, hold ourselves accountable.”

After a brief introduction, Dove lists lies they have told throughout their life, starting with when they were a teenager and got into a relationship with a boy they weren’t attracted to because he was popular and lying about winning a poetry contest at school.

But then the lies get more serious, like lying about being a firefighter in a TED Talk and while being profiled by Yahoo! In reality, Dove only worked as a wildfire prevention officer and never actually fought any fires.

They also said they had a Bachelor’s degree in genetic engineering from UC-Berkeley, but they actually went to Berkeley City College, a junior college located in the same city.

Dove outing themself as a serial liar calls into question the validity of two stories that were reported on by LGBTQ Nation, both of which relied on Dove as a source and screenshots of comments provided by Dove.

A November 26, 2018 story published on LGBTQ Nation described Dove’s account of being pepper-sprayed in a women’s room in Asheville High School in North Carolina by the mother of a student at the school. Dove claimed that their gender fluid appearance led to the transphobic attack. The woman then, according to Dove, followed them on social media and said that they’d do it again, but they had a conversation and the woman came to understand transgender people better.

Dove posted about the story on Instagram and it went viral, but NBC News did some digging and found some inconsistencies. Dove claimed that the woman got their identity (so that she could follow Dove on social media) from “the police,” but local police told NBC News that they never received a report about the incident and therefore couldn’t give out Dove’s name.

Dove provided NBC News with the name and email address of the woman, but the person who responded to the email refused to be interviewed and there is no parent with that name at the school or in the state of North Carolina.

Dove maintains that this incident happened and that they didn’t file a police report at the time.

In a separate story published on December 6, 2019 on LGBTQ Nation, Dove received a message on Instagram from the mother of a possibly transgender child. The mother accused Dove of being a pervert and making her child “sick.”

After an online conversation, the mother came to understand transgender people better. Dove posted about the interaction on Instagram and on Facebook – along with screenshots of the interaction – and the story went viral because of their heartfelt response to the mother and the mother’s apparent change of heart.

But now people on social media did some searching and found that the image of the mother from the screenshots of the comments is actually a stock image that appears when one searches Google for “angry old woman.”

Dove maintains that the interaction happened, although they said that the person they were interacting with might have misrepresented themselves as the mother of a trans child.

“Sometimes you don’t know if the person is real or not,” they told NBC News.

Both articles on LGBTQ Nation relied heavily on Dove as a source and both have been removed from our archives.

Perhaps the most explosive lie that Dove admitted to in the video is about Italian actress Asia Argento. Argento was one of the first women to accuse Harvey Weinstein of sexual misconduct and was a central figure in the #MeToo movement.

Dove maintains that the text messages are real, but they admitted to lying about selling them to TMZ.

“I got $10,000 from TMZ,” Dove admitted in the video from this weekend. “I asked for advice from my closest friends, some of which are very powerful and wonderful people and very connected in the industry, and they said just do it.”

NBC News asked why they took money for the messages since they effectively implicate Argento in a serious crime – sexual assault on a minor – and Dove said that they needed the money in case they needed a lawyer from the fallout with Argento.