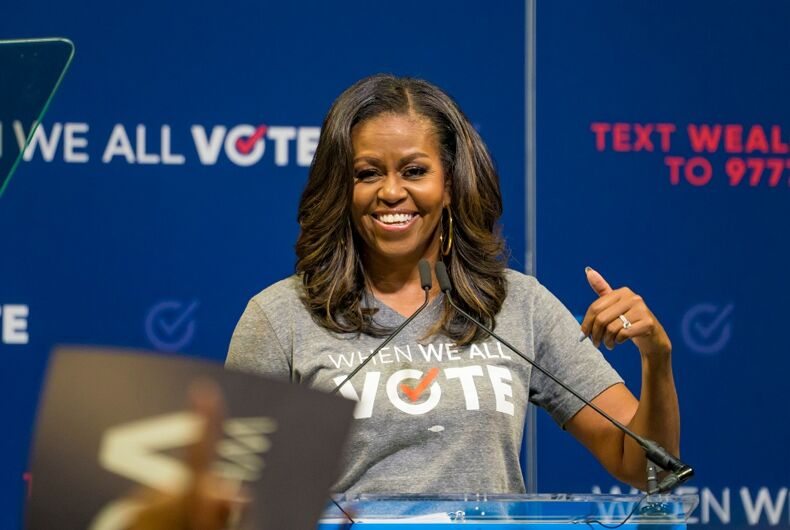 This past October, Ellen and Bush were caught having a good time together at a Dallas Cowboys football game. This led to criticism on social media, both because of Bush’s anti-LGBTQ political positions and homophobic campaigns as well as Bush’s war in Iraq, which killed hundreds of thousands of people.

Related: Michelle Obama’s scathing description of Trump has anyone with divorced parents nodding in agreement

Obama was talking with Jenna Bush Hager, Bush’s daughter, in an interview for Today yesterday.

“I think you’re friends with both Ellen and my dad,” Hager said. She asked about what she thought about the controversy.

“I had an opportunity to sit by your father at funerals, the highs and the lows, and we shared stories about our kids and about our parents,” Obama said.

She then said that she can have the same values as Bush without sharing his political views.

Watch part two of @MichelleObama’s interview with @jennabushhager about dropping her youngest daughter off at college, the 2020 election and her special friendship with former President George W. Bush. pic.twitter.com/wz9ZBAtpG6

Ellen defended her friendship with Bush at the time by saying that she values friends who don’t share her beliefs.

“Just because I don’t agree with someone on everything doesn’t mean that I’m not going to be friends with them,” she said on her show. “When I say, ‘Be kind to one another,’ I don’t mean only the people who think the same way that you do. I mean be kind to everyone.”