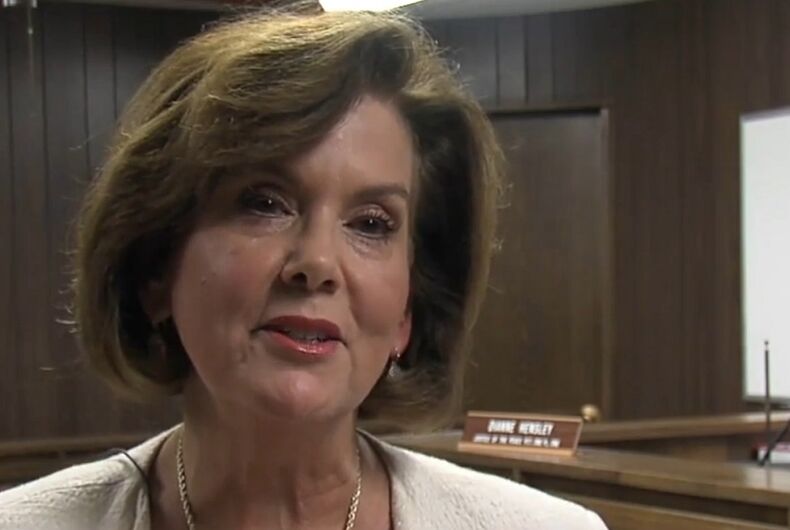 A judge in Texas is suing a state agency after she was sanctioned for refusing to perform same-sex weddings, arguing that she is being discriminated against as a Christian.

Last month, McLennan County Justice of the Peace Dianne Hensley (R) received an official warning from the state’s Commission on Judicial Conduct for refusing to perform same-sex marriages, even though she performed around 70 straight marriages since 2016.

The state told her that refusing to marry same-sex couples violated state rules about judicial impartiality and cast “doubt on her capacity to act impartially to persons appearing before her as a judge due to the person’s sexual orientation.”

But she says she wasn’t discriminating since LGBTQ people could have gone to another city to get married by a judge.

“For providing a solution to meet a need in my community while remaining faithful to my religious beliefs, I received a ‘Public Warning,’” she said in a statement. “No one should be punished for that.”

Hensley says that the Commission on Judicial Conduct violated the Texas Religious Freedom Restoration Act when it gave her an official warning. She didn’t get fined by the agency, but she claims that the practice of her religion was significantly burdened and she wants $100,000.

“I have no desire to offend anybody, but the last person I want to offend is God,” she told KXXV before she got the warning.

“So I’m entitled to accommodations just as much as anyone else,” she added.

“These elected officials continue to waste taxpayer money in an obsession to discriminate against gay and transgender Texans,” said Texas Equality CEO Ricardo Martinez in a statement. “This is not what Texans want or expect from elected officials. Discrimination of any kind is unacceptable. Their actions are mean spirited, futile, a waste of taxpayer money and most importantly, it’s wrong.”

Drag queen Jasmine Masters is the most viewed GIF of 2019