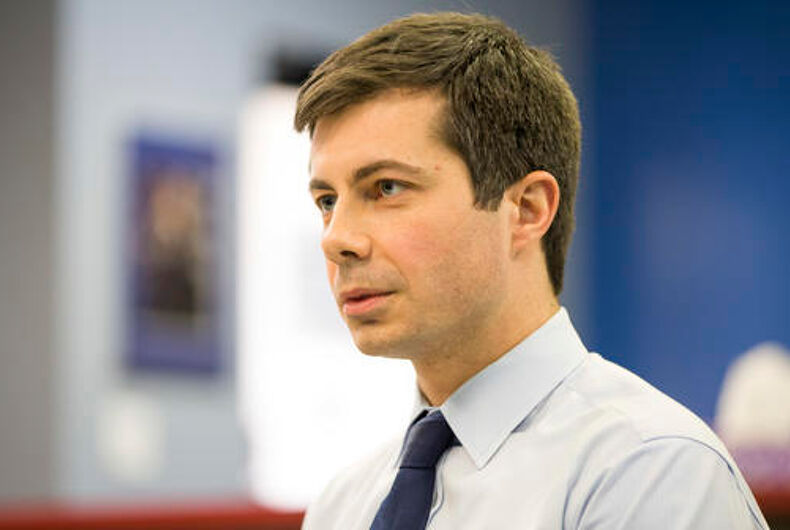 Wikipedia is the internet’s free encyclopedia, the tenth-most visited site on the world wide web, and “most popular general reference work” online, according to…itself. Wikipedia’s also one of the primary sources of information for millions of Americans – either through its site directly, or indirectly via aggregates and media websites (i.e. Google or Facebook), which source answers to questions or auto-generate pages based on articles from their website.

As it is an independent, non-profit entity, Wikipedia has stringent guidelines for contributors, but it has always remained open to edits from anyone who wishes to contribute information or content, as long as it is deemed relevant enough. While Pete Buttigieg’s campaign as President bought him to national recognition this year, someone has been protecting his interests on Wikipedia since at least 2010.

Related: Trump’s revelation that he dreams about Pete Buttigieg doesn’t sit well with the candidate

In an investigative report for Slate. reporter Ashley Feinberg concluded that at least one person worked behind two different accounts to provide inside information on Buttigieg and his associates. This includes a headshot of Pete from 2011 that wasn’t publicly available before then that the soon-to-be mayor of South Bend signed off on it being available on the website. Feinberg relies on internet archiving sites and anonymous Wikipedia editors for much of the non-public information.

“The evidence seems overwhelming that, despite the campaign’s repeated denials, Pete Buttigieg has had knowledge of, and at least some active participation in, the maintenance of his Wikipedia presence,” Feinberg claims. “This is not a crime. It’s just a deeply weird thing to deny.”

The online saga began in 2010, when Wikipedia user “Hanumang06” published the first known mention of Buttigieg on the website, making a biography page for him while he was running for treasurer of Indiana. Wikipedia guidelines for biographies of a living person don’t allow for first person-written or approved stories – and the biography was provided by Buttigieg and his staff, so the page was removed.

One day after the Buttigieg page was removed, then Hanumang06 disappeared and then came “Streeling” – a user who between 2011 and May of this year, only worked to edit and alter Buttigieg-related pages. Streeling wrote the first published page of Buttigieg, who by that time had became mayor-elect of South Bend. This user explicitly wrote in his edit summary that he wasn’t affiliated with Mayor Pete, but that appears to be a half-truth.

Neehar Garg, who serves as the Product Manager for map building site Mapper.ai, confirmed to Slate that he was both users. Garg went to Buttigieg’s high school and also allegedly volunteered for him in his 2010 treasurer campaign, although his relationship with him after that is unclear. Yet, Buttigieg’s campaign continues to deny that anyone associated with the candidate has ever been authorized to edit his Wikipedia page – although the candidate’s official account is one of Garg’s few followers on Instagram to date.

Streeling continued to make edits on the website until May of this year which are still available for the public to view. Feinberg doubts that Garg did these years of edits unprompted, and he would not go on record about anything else after his confirmation. Both Buttigieg’s campaign and Wikipedia have not returned comment at this time.

Many people are doubting the validity of the story provided by Buttigieg, but also the validity of Feinberg’s investigation. Either way, it wouldn’t be the first time that a politician tried to control their internet presence – in fact, then-Senator Joe Biden was one of the congresspeople and senators who benefited from conflict-of-interest editing from congressional staff in 2006 – staff made edits in efforts to make Biden’s biography “more fair and accurate”. Then-U.S. Representative Mike Pence also had edits made to his page by staff on the Hill in 2011, according to the Huffington Post.

Apparently Pete Buttigieg has had a shadow operation to keep his wikipedia page shiny since 2011 but denies it like a normal person who is not afraid of other people knowing how hard he tries to look perfect https://t.co/okAWSqlQr8 via @slate

We don’t care who edits the Wikipedia pages, by and large. But we should care about a potential future president lying to cover it up.
Why not just admit it? It’s not illegal, yet they double down on the lie. That’s the concerning part.

The Pete Buttigieg Wikipedia mess makes me wonder: there must come a time when politicians sit down with their inner circle and decide, "let's lay out my goals and career in terms of lying. Here's what we will and won't lie about, here's how we'll do it, and here's why." Right?

How should we view reporters who think that article provides conclusive evidence he did. https://t.co/lP9M8iVjYC

I tried to read the article but it's basically Pepe Silvia, in reverse pic.twitter.com/trjOS06OiQ

I wont be voting for Pete in the primary but I just read this article and its a really fucking stupid thing to waste our collective energy & attention on when the real enemy is the selfish dipshit traitor in the White House rn #VoteBlueNoMatterWho2020 https://t.co/veaWSTAQMi