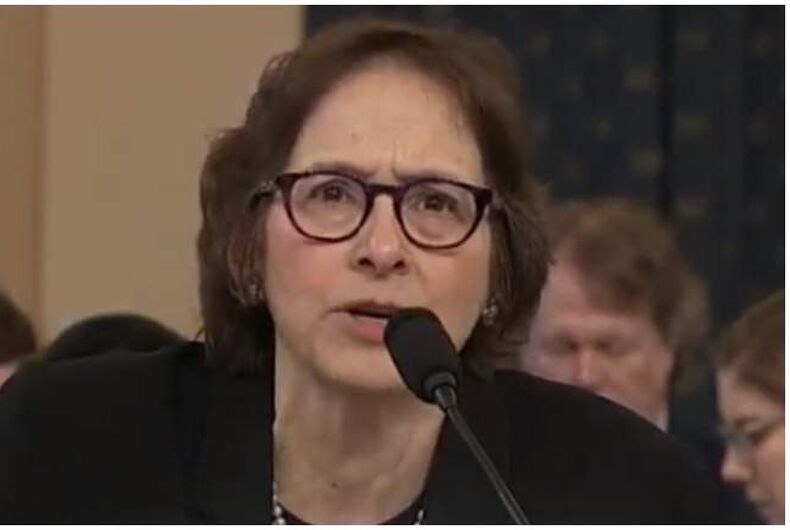 Pamela Karlan, the standout witness in yesterday’s impeachment hearings, is also an LGBTQ champion. Karlan, a self-described “snarky bisexual Jewish” woman, fired back at Rep. Doug Collins (R-GA) for implying she is incompetent and partisan in a made-for-TV moment.

Karlan, a potential Supreme Court nominee to replace David Souter in 2009, argued in front of the court in October in a case that could shape the future of LGBTQ civil rights. She represented Gerald Bostock and the late Donald Zarda, both of whom were fired from their jobs for being gay.

Related: Neil Gorsuch could split the Supreme Court to a narrow victory on LGBTQ rights

A constitutional law expert and Stanford University professor, Karlan testified as to whether the allegations against President Donald Trump warranted impeachment proceedings under the constitution.

Collins, the top Republican on the House Judiciary Committee, claimed that Karlan was a biased witness and insinuated that she hadn’t read the 300-page report and witness transcripts issued by House Democrats. In response, Karlan schooled Collins both on her competence and the facts presented in the report.

“Mr. Collins, I would like to say to you, sir, that I read transcripts of every one of the witnesses who appeared in the live hearing because I would not speak about these things without reviewing the facts,” Karlan said. “I’m insulted by the suggestion that, as a law professor, I don’t care about those facts.”

“Everything I read on those occasions tells me that when President Trump invited, indeed demanded, foreign involvement in our upcoming election, he struck at the very heart of what makes this a republic to which we pledge allegiance.”

Karlan has argued several cases in front of the nation’s top court and assisted Edie Windsor in her precedent-setting court case striking down part of the Defense of Marriage Act. Altitude Express v. Zarda (consolidated at the Supreme Court with Bostock v. Clayton County, Georgia) is among the most controversial cases of this term.

The cases revolve around civil rights protections in Title VII of the Civil Rights Act of 1964 that prohibit employers from discriminating based on “sex.” Karlan argued that it is impossible to separate sexual orientation from sex since the men wouldn’t have been fired if they conformed to gendered expectations of their sexuality.

It is an open question whether conservative justices who take a strict textualist approach to statutory construction will agree. The Trump administration is siding with the employers in the cases by arguing that Congress did not intend to protect LGBTQ workers in 1964.

“We’re talking about millions of people that go to work fearful of losing their job because of who they are, how they identify, and who they love, and that’s just wrong, and somebody needed to stand up and confront this head-on,” Bostock told LGBTQ Nation earlier this year.

“So I didn’t ask for any of this, but I’ll be the one to do it. Because I don’t want anyone else to experience what I’ve had to experience the last six years of my life.”

Pamela Karlan *is not* messing around: "Here Mr. Collins I would like to say to you, sir, that I read transcripts of every one of the witnesses who appeared in the live hearings … I'm insulted by the suggestion that as a law professor I don't care about those facts." pic.twitter.com/TXhmZXVWiM

You’ll be able to get PrEP for free soon

Kamala Harris should be the Democratic Vice Presidential candidate