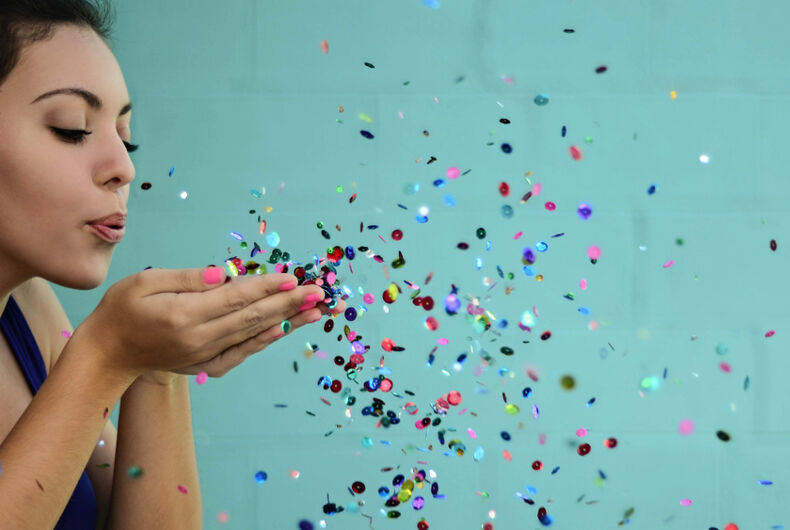 If you’re looking forward to throwing giant handfuls of glitter onto your decorations, party favors and guests this holiday season, the Florida Gulf Coast University (FGCU) has an important ecological message for you — don’t, or else you’re literally poisoning yourself and every living thing around you.

In an article to mid-year graduates, FGCU discouraged people from throwing glitter in their commencement photos. “Billions of shiny microplastic pieces smaller than 5 millimeters … sits in the bowels of our 800-acre campus,” FGCU’s Keith Gibson wrote.

Related: The “straight pride parade” organizers fell victim to “terrorism” … in the form of glitter

Most glitter won’t decompose within our lifetimes, he added, and much of it will wind up polluting our watery ecosystems, killing animals that ingest it and breaking down into toxic chemicals we ingest.

Glitter isn’t biodegradable. It’s largely made from polyethylene terephthalate (PET) plastic backed with a layer of aluminum. Most glitter takes 1,000 years to completely decompose. Plankton, fish, and birds often eat the shiny plastic and die of starvation as it remains undigested in their bellies.

“About 10,000 tons of the shiny stuff are produced each year,” Keith Gibson adds, “… [bringing] extra shimmer to crafts, cosmetics, paint finishes and, of course, photos.”

When PET plastics break down, warns Dr. Trisia Farrelly, an environmental anthropologist at the Massey University of New Zealand, they release chemicals that can disrupt hormones in humans and animals. These chemicals have been linked to “the onset of cancers and neurological diseases,” Farrelly says.

This news may be particularly vexing to queer people who enjoy adding a bit of pizzaz to their makeup or costumes, or those who enjoy “glitter bombing,” an activist tactic that became popular around 2011 when queer protestors used them to publicly shame anti-gay politicians like Newt Gingrich, Tim Pawlenty, Randall Terry and Michele Bachmann’s conversion therapy-loving husband Marcus. Transgender activists even glitter bombed gay sex advice columnist Dan Savage over his allegedly discriminatory comments.

So if you want to celebrate the holidays with some sparkle, might we suggest biodegradable glitter?

Will a Dolly Parton statue replace a Confederate memorial in Tennessee’s capitol?