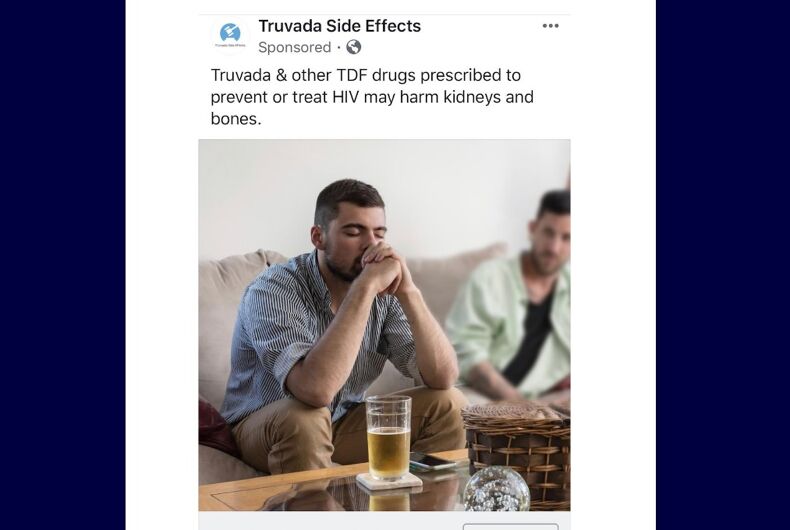 The ads are looking for people to participate in a class action lawsuit, but LGBTQ organizations say they are spreading misinformation.Photo: via GLAAD

Facebook is coming under fire for allowing ads that suggest that PrEP – the medication regimen that is 99% successful in preventing the transmission of HIV – is dangerous.

The ads started appearing on Facebook several months ago, and they say that Truvada – the drug approved for use as PrEP seven years ago – has significant side effects for kidneys and bones.

“Truvada & other TDF drugs prescribed to prevent or treat HIV may harm kidneys and bones,” one of the ads says.

“Side Effects from taking an HIV Drug… Click ‘Learn More’ NOW to confirm eligibility for significant financial compensation!” say another.

The ads are making people doubt the safety of PrEP.

“Four of my seven PrEP patients came in and said, ‘How could you be putting me on this medication that’s so unsafe? My Instagram ads say so,'” Demetre Daskalakis, deputy commissioner for the Division of Disease Control at the New York City Department of Health and Mental Hygiene, told the Washington Post.

When they first learned about the ads in September, LGBTQ and public health organizations tried to work with Facebook to get them removed, saying that the ads make false claims about PrEP which can put people’s lives in danger.

The ads seek participants in lawsuits being filed by personal injury attorneys across the country against Gilead, the company that produces Truvada. The lawsuits claim that Gilead withheld Descovy – a new drug approved for use as PrEP this year – because they wanted to make more money from Truvada.

Descovy has fewer kidney and bone side effects, although public health officials have said that the differences are not significant for most people and that the majority of patients who are having no side effects with Truvada have no reason to switch to Descovy.

What can be a problem with Truvada, though, is when it’s used in combination with other medications to treat people who already have HIV. GLAAD and other organizations say that the distinction is fundamental, and by implying that PrEP is unsafe, the ads are putting people’s health at risk.

Now over 50 LGBTQ, HIV, and public health organizations have signed an open letter urging Facebook to pull the ads.

“Given the history of how our community was met by deadly indifference during the early years of the AIDS crisis, the refusal to take action is deeply concerning,” the letter states. “These concerns of the LGBTQ community, AIDS activists, and public health professionals need to be prioritized by Facebook, especially since lives and public health are at stake.”

Facebook CEO Mark Zuckerberg told the U.S. Congress earlier this year that, while Facebook allows ads with false information, it would take down ads that “could risk imminent physical harm.”

This past March, Facebook said that it would block ads that promote anti-vaccine conspiracy theories and lies after the World Health Organization said that anti-vaccination ideology was one of the top global health threats in 2019.

The groups that are paying for the anti-PrEP ads, though, say that they believe that they can prove that Truvada is dangerous when taken as PrEP – they just need the ads to find people who have suffered from the side effects.

“The claim that somehow this is dangerous to a certain group of people who have HIV, but is not dangerous to people who do not have HIV, is misplaced,” said Robert Jenner, who is co-lead counsel in a lawsuit against Gilead.

Just over a month ago, Instagram, which is owned by Facebook, rejected PrEP ads for being “too political.”