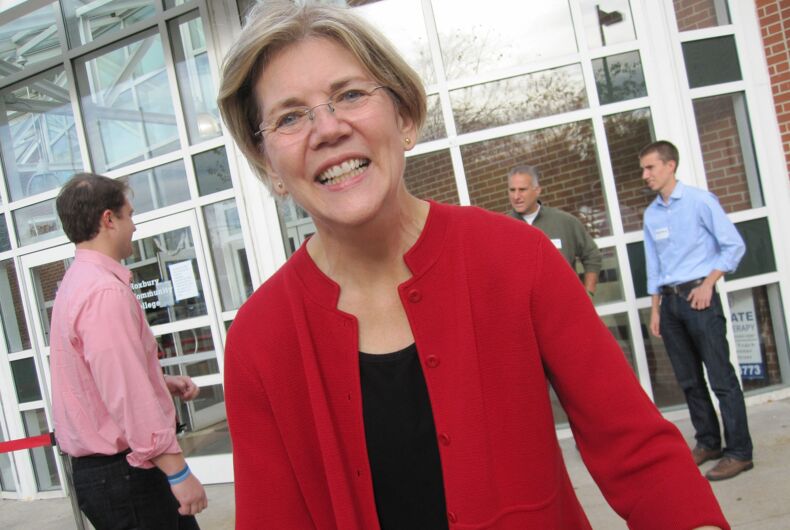 Sen. Elizabeth Warren got emotional during a campaign stop after a queer teenage asked the presidential candidate a personal question about acceptance. The lengthy exchange came as the candidate was fielding policy questions about her presidential platform.

Raelyn, who is only identified with a single name in reports, identifies as a member of the LGBTQ community. While her immediate family knows, her extended family, gathered together for the Thanksgiving holiday, did not.

Related: Elizabeth Warren is the top candidate among LGBTQ people according to new polling

“I was wondering,” Raelyn asked, “if there was ever a time in your life where somebody you really looked up to maybe didn’t accept you as much? And how you dealt with that?”

In response, the senator got personal, describing the end of her first marriage. It is not a topic Warren addresses normally.

“My mother and I had very different views of how to build a future. She wanted me to marry well, and I really tried, and it just didn’t work out,” Warren said as her voice wavered.

“And there came a day when I had to call her and say, ‘This is over. I can’t make it work.’ And I heard the disappointment in her voice. I knew how she felt about it. But I also knew it was the right thing to do and sometimes you just gotta do what’s right inside and hope that maybe the rest of the world will come around to it. And maybe they will, maybe they won’t, but you gotta take care of yourself first.”

“I was really nervous,” Raelyn told CNN. “Honestly, I was most nervous about, ‘OK, what if this is the question that gets aired on TV and then there’s a bunch of questions about it at home.”

“I loved it. I was scared. I didn’t want her to feel, almost, pressured to answer it, because I know being put on the spot and being on that big of a pedestal in front of America, it’s kind of like, you don’t want to put all of your personal information out there,” she said.
“You don’t want to have everybody see everything, every single side of you. And I was just really touched that she had the courage to answer that question in a different way than she has spoken before. And that she cared enough about me and about her for voters to be able to open up.”
Election 2020
Elizabeth Warren, LGBTQ acceptance