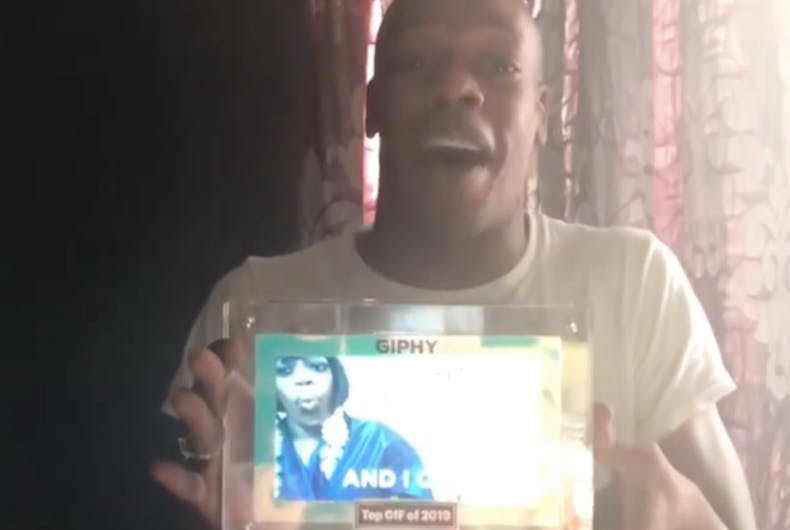 Jasmine Masters accepts GIPHY's award for the most viewed meme of 2019 for her "And I Oop—" momentPhoto: Instagram screen capture

The animated GIF site GIPHY has honored drag queen Jasmine Masters with an award for her “And I oop” clip being the most-viewed GIF on their site. The viral clip, which shows Masters accidentally hitting herself in the genitals during a video rant, is often used as a reaction for people who make self-defeating errors while trying to express themselves.

To commemorate the honor, Masters posted an Instagram video of herself opening the box containing GIPHY’s award. The box included a congratulatory card, a small sculpture of GIPHY’s logo, and a video picture frame that repeatedly plays her GIF. During the video, Masters laughs while accepting the award with glee.

Related: RuPaul inducted into the California Hall of Fame as “most commercially successful drag queen ever”

Fans of RuPaul’s Drag Race will recognize Masters as the Los Angeles-based drag performer who appeared in season 7, All Stars season 4 and the reality competition’s 2018 Holi-slay special.

Though Masters was eliminated early on in the competition, she has since maintained a loyal following with her humorous impromptu video rants on YouTube and Instagram. Her videos usually begin, “I am Jasmine Masters and I have something to say.”

The “And I oop” moment actually occurred during her Oct 28, 2015 video entitled “Jasmine Masters handle your liquor” which currently has 1,773,956 views. Here’s the video below — the GIF-worthy moment happens at 4:30:

At the key moment, Masters moves and then purses her lips, quietly closes her eyes for a moment, and then groans. When she continues speaking, she drops into a deeper voice and admits, “I just hit my balls.” She then begins fanning herself and says, “Ooooh, it’s got hot. I gotta get out of here. I’m done, I, um, yeah,” before waving off her fans and quickly ending the video.

Below is Masters’ video of herself opening GIPHY’s award:

And I Oop #weprintvideo thanks so much. Winning 1st place in the gif of 2019 with 419 million views. Hey! @giphy

50 years ago, an awful movie about a trans woman was Tom Selleck’s first role on the big screen