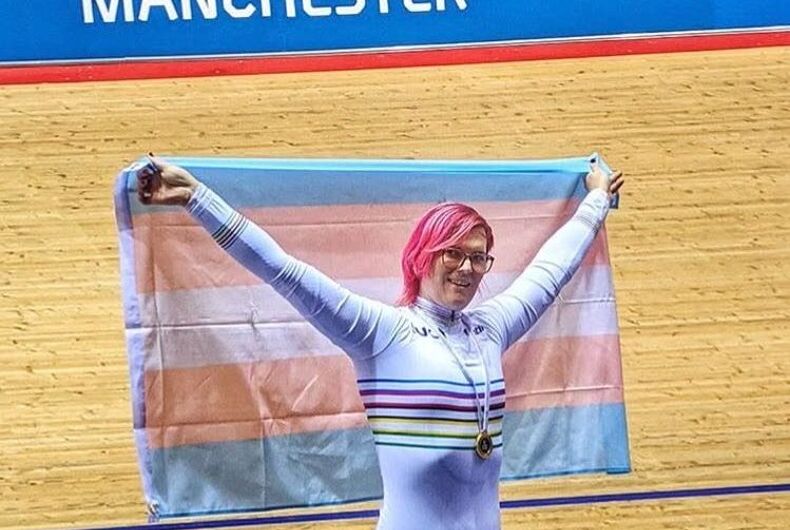 Canadian cyclist Rachel McKinnon broke the masters women’s world record for the 200-meter time trial for the age 34-39 category. Since her win in October, she’s been on the receiving end of death threats and a thread of Donald Trump Jr. tweets.

This week, she wrote an op-ed in The New York Times, detailing her experience, especially since her victory since October.

“I’ve received death threats, but I try not to dwell on them,” McKinnon wrote. “People love to claim that I cheated. I didn’t. Cycling’s governing body, the Union Cycliste Internationale, has no doubts that I followed all of the rules.”

McKinnon has been cycling professionally for two years. Off the bike, she is also an Associate Professor of Philosophy at the College of Charleston with a PhD from the University of Waterloo. Before making headlines for grabbing the record for fastest time during a 200-meter female sprint masters’ race (which she notes was at a qualifier, and “13 percent slower” than Kelsey Mitchell’s world record 200-meter record), McKinnon is also known for calling out transphobic tennis athlete Martina Navratilova, who lost her position in a LGBTQ organization due to her comments on transgender athletes.

Throughout the article, McKinnon talks about the misconceptions of her career and talks about the many differences, specifically in size and shape, that her cisgender competitors have. “Every elite athlete has competitive advantages,” she writes.

“Many want me to race against men,” McKinnon notes. “I have news for them: I’m not allowed. I’m legally female.”

“Some people think this is unfair because I used to have more testosterone in my body, once upon a time,” she continues. “They think this, even though my body hasn’t been able to produce testosterone for seven years.”

This reiterates many things that McKinnon has said since clarifying the news of her record-breaking performance in October.

McKinnon also discusses a transgender athlete making it to the Olympics, reiterating how hard and unprecedented that is. “Since the 2004 Athens Olympics, there have been over 54,000 Olympians. Not one of them has been openly trans…next year, there are a few athletes who have the potential to become the first openly trans athlete to compete in the Games.”

“The Union Cycliste Internationale, USACycling, Cycling Canada, the Canadian and United States governments and the state of South Carolina all agree that I’m female.”

The cyclist also opens up about the difficulty caused in her life by transphobia and bigotry, including needing about 4 people to monitor her Instagram comments and messages who have “been overwhelmed by the volume” of the hate.

“Trans women are women. We are female. And we are not taking over.”

Allowing trans women athletes to compete against cisgender women, she concludes, “is not the beginning of the end of women’s sports.”