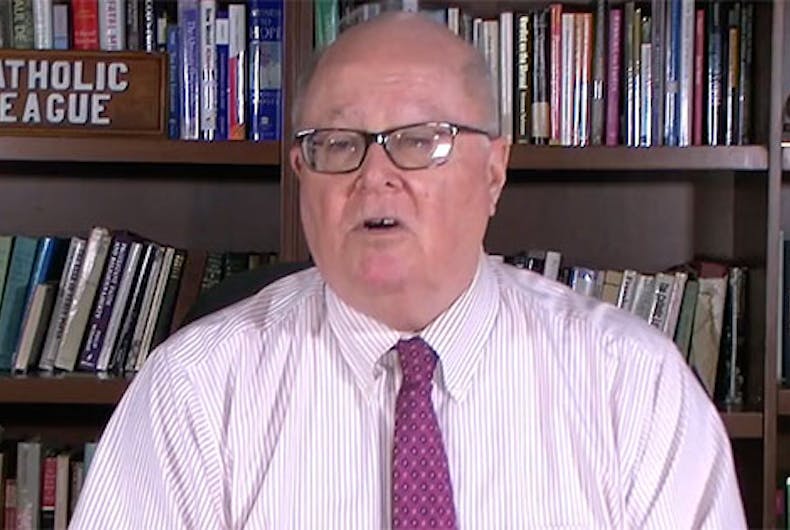 In an email blast, he opened by complaining about the lack of LGBTQ Hanukkah and Ramadan events.

He could have quickly googled and found that there are gay Hanukkah events and Ramadan events for LGBTQ people, but his argument isn’t in good faith. “Why is everyone picking on Christians instead of Muslims?” is never a complaint made in good faith.

The email blast lists various LGBTQ holiday events. He wrote about “The Ru Paul Drag Race show” – probably referring to A Drag Queen Christmas, a show that some queens who appeared on RuPaul’s Drag Race are performing in – and criticized the title of one of their songs, “All I Want for Christmas is Nudes.”

Another show he complained about is a drag performance based on the sitcom Golden Girls, which Donohue says is for “aging homosexuals,” that is, “men who are enthralled at the promise of sex after 40.”

Donohue is 72-years-old and, apparently, unaware that there are straight men over 40 who have sex. Let that sink in.

He worked in Netflix’s Brazilian gay Jesus movie: “We don’t expect that next month, when we celebrate Martin Luther King Day, Netflix will depict the civil rights leader in a homosexual relationship.”

“Muhammad is also safe,” he wrote.

And that seems to be the bottom line for him – LGBTQ people around him are mostly celebrating Christmas instead of other religions’ holidays.

This shouldn’t be surprising – most people in the U.S. and Brazil are Christian, or they’re nonreligious but come from culturally Christian backgrounds. Christianity affects Americans and Brazilians more than Islam does.

That’s why LGBTQ Islamic cultural events and art are generally produced by LGBTQ Muslims. Donohue – who is wholly committed to not doing even the most basic research before writing his email blasts – will probably never hear about them.

Buttigieg & Biden are running neck and neck in New Hampshire