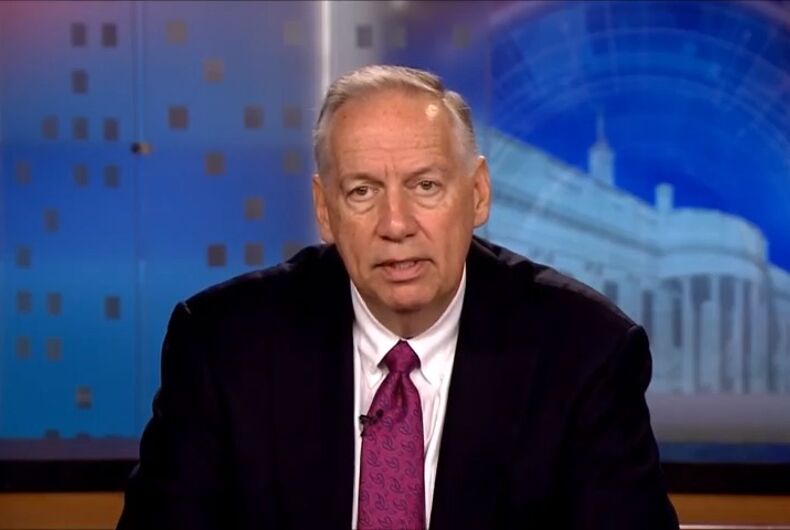 While Washington is fixated on the ongoing scandal of President Trump’s Ukranian quid pro quo, it’s easy to lose sight of one of the biggest changes that Trump has made to foreign policy. He’s essentially outsourced American’s international interests to the religious right, creating a shadow State Department that allows influential evangelicals to promote their own interests under the guise of diplomacy.

That’s certainly the case when it comes to Ralph Drollinger, one of the worst anti-LGBTQ religious right leaders around. Drollinger has called homosexuality an “abomination” and “illegitimate in God’s eyes.” He also believes that women should defer to men as leaders.

Drollinger runs the White House’s Bible study group, which includes the likes of Secretary of Education Betsy DeVos, Vice President Mike Pence and, conveniently, Secretary of State Mike Pompeo. Drollinger also likes to stick his nose into other countries, ostensibly to expand his ministry’s reach but also to meddle in U.S. diplomatic relations.

He’s able to do so because of his proximity to the major players in the Trump administration, which is a lure for countries looking to ingratiate themselves with the president.

As a New York Times profile recently showed, Drollinger is quite comfortable with leveraging his friendships to expand his empire overseas. Pence and Pompeo each promoted Drollinger’s Bible studies program to the president of Honduras, who subsequently met with Drollinger about the program.

Drollinger also traveled to Nicaragua last July, giving a speech at the country’s 40th anniverary of the Sandinista revolution, despite the efforts of the current U.S. ambassador to dissuade him. Nicaraguan President Daniel Ortega has been criticized by the U.S. for killing hundreds of dissidents and targeting Catholic Churches for harassment. (Drollinger has called Catholicism “one of the primary false religions of the world.”)

Drollinger insisted that his visit was solely to promote his Bible studies, but it’s obvious that the Ortega and his wife, Rosario Murillo, were looking to get themselves into the administration’s good graces. Drollinger floated the idea of having Pence visit Nicaragua. In a meeting with Drollinger, Murillo complained about outside groups being obsessed with “abortion and gay rights and gay marriage,” adding “we have not approved any of those.” Drollinger reassured her, “Mike Pompeo will understand all of these dimensions.”

Drollinger has his hand in Ukraine as well. There, he’s paired up with a parliament member who has called being gay “a treatable disease.”

Drollinger may be a particularly outrageous example of the heavy hand the religious right has in American foreign policy – but he’s hardly the only one. Trump’s decision to relocate the U.S. Embassy from Tel Aviv to Jerusalem overturned decades of American consensus that that held Jerusalem off limits because of disputes between Israel and the Palestinians over the city’s status. But the move was long wished for by the religious right, who were out in force to celebrate the embassy opening.

As for Trump, he’s only interested in foreign policy insofar as it helps him, which is why he’s in the impeachment mess that he’s in. Because conservative evangelicals are his most fervent supporters, he’s happy to do whatever makes them happy. If that means outsourcing U.S. foreign policy solely to their interests, that’s fine by him. For the rest of us, it’s just one more scandal.