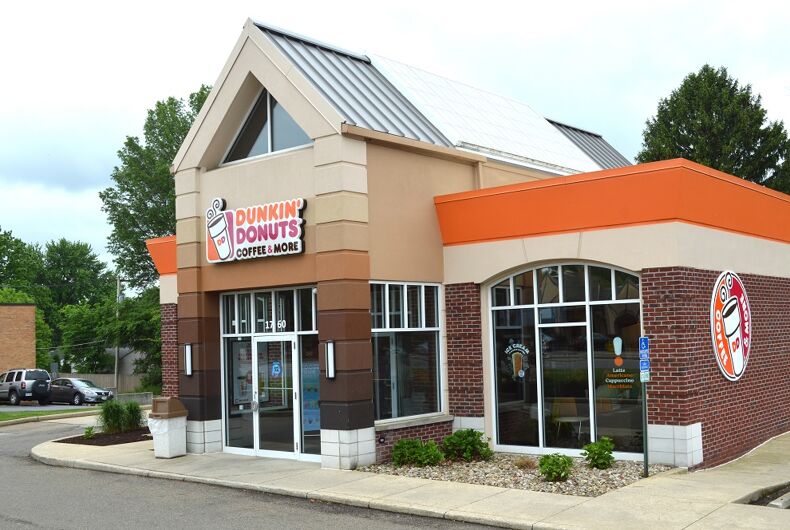 A Dunkin' Donuts in Ohio.Photo: Shutterstock

A transgender woman in Pennsylvania is suing her employer Dunkin’ Donuts in federal court, saying that she was beaten and humiliated by customers while the restaurant’s management told her to quit if she couldn’t handle the abuse.

The woman, who is identified as “Jane Doe” in the lawsuit because she is worried that the customers will find her if her real name is publicized, worked at a Dunkin’ Donuts in Bethlehem, Pennsylvania.

Related: After being told he had discriminated against a trans employee, this boss made it much worse

In her complaint, she says that her supervisor misgendered her regularly, calling her “dude” and referring to her with “he” pronouns, even in front of customers.

She said that customers started refusing to use her register and that she was told she shouldn’t go to the bathroom at work because customers “weren’t comfortable” with her in the women’s room.

This past April or May, according to the suit, three customers came into the restaurant and attacked her, called her a “faggot,” and threatened to kill her. When she complained to her manager, the manager allegedly responded, “If you don’t feel safe, go home.” She left and several days later her name was completely removed from the restaurant’s work schedule.

The lawsuit says that Doe was told that she was fired for taking too much time off without giving enough notice, but she says that that was made up after the fact. Doe also says that it’s Dunkin’ Donuts policy to send three warning letters before firing someone, and she did not get a warning letter about her time off.

The manager named in the suit told Lehigh Valley Live, “I believe that was already handled and the case was resolved.” Dunkin’ Donuts says that they don’t comment on pending litigation.

“My client was subjected to humiliation based on her gender identity and ultimately fired illegally,” said Justin Robinette, the attorney representing Jane Doe. “Nobody should have to endure this kind of abuse at their job and we plan to hold Dunkin’ Donuts responsible for their actions in court.”

She is now homeless and living in Los Angeles, according to Robinette. Her lawsuit is seeking unspecified damages.