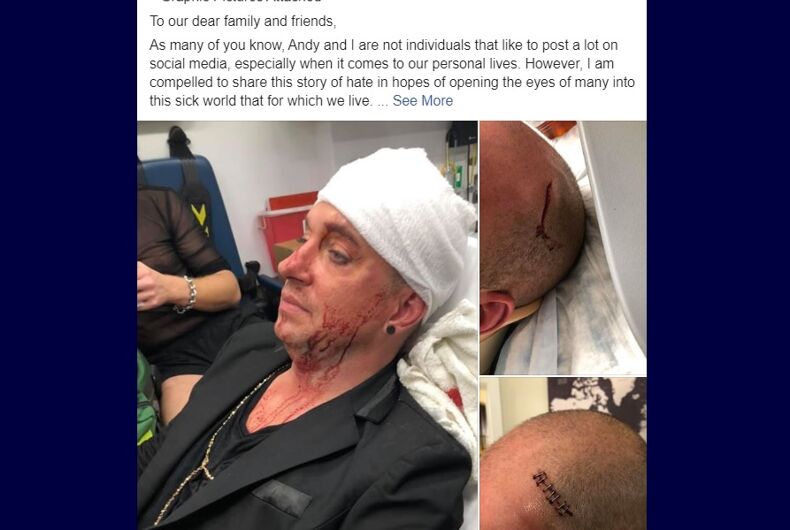 The victims were attacked outside the Number 9 bar in D.C. at around 10 p.m. on Halloween.Photo: Screenshot/Facebook

Three gay men say that they were severely beaten last week in what they claim was an act of hate.

According to the police report, the victims were attacked outside the Number 9 bar in D.C. at around 10 p.m. on Halloween. The Number 9 is a gay bar.

Related: DC dentist fixes hate crime victim’s shattered teeth for free to give back to community

The police report says that the assailant punched “Victim 1” in the head and slammed the victim against a glass window. Victim 1 was knocked unconscious and needed staples in his head to close the laceration.

A man named Timothy Luke identified himself on Facebook as one of the victims. Luke said that his husband Andy Jackson and their friend Jeremy Austin were also the victims of the attack.

“Many homosexual and derogatory slurs were stated during this attack, however, I am unable to firmly state whether this was a hate crime or just a heinous attack,” Luke wrote. Police have designated the attack “potentially being motivated by hate or bias.”

He said that all three victims had to go to the ER for treatment after the attack, but that Jackson’s injuries were the most severe. Jackson suffered a concussion and needed seven staples on his scalp.

**Graphic Pictures Attached**To our dear family and friends,As many of you know, Andy and I are not individuals that…

Luke did not provide a description of the attacker.

“We are aware of the incident but it’s not clear what happened yet,” Number 9 co-owner Ed Bailey told the Washington Blade. “We are working with the police and compiling video to accurately figure out what happened.”

D.C. Police released video of a person of interest in the case and have asked that anyone who can identify them call (202) 727-9099.