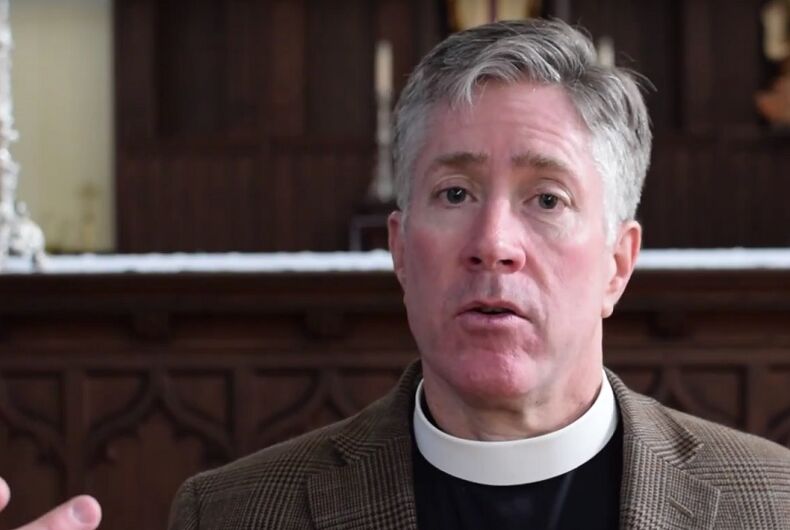 An anti-gay Anglican minister in Florida resigned last year after admitting to sexual harassment and “undesired physical displays of affection.” Now an investigative report found that many of his victims were young men and aspiring priests he had power over.

Father Eric Dudley – married, the father of three – is the founder of St. Peter’s Anglican Church in Tallahassee and was the leader of that church until he resigned in disgrace.

Dudley was a pastor at a different Episcopal church for ten years. In 2005, he left that church to found his own, citing the Episcopalians’ increasingly pro-LGBTQ stances, and his new church – St. Peter’s – was associated with the Anglican Church of Uganda.

The independent group Godly Response to Abuse in the Christian Environment (GRACE) investigated the circumstances that led to Dudley resigning, and their report, released yesterday, says that Dudley would lavish attention on “attractive young men.” He would give them gifts and jobs at the church, even while he raged against homosexuality and marriage equality from the pulpit.

GRACE spoke with 51 alleged victims and witnesses and reviewed text messages and emails, concluding that it’s “significant that the reported victims’ accounts often corroborated each other, even though they were not aware of other reported victims at the time.”

One of Dudley’s alleged victims said that he went on an out-of-state trip with Dudley, and he booked a hotel room with a single large bed and blamed it on a front desk error.

The victim woke up to Dudley rubbing his back and chest.

“Part of me is going like, ‘This is super strange,’” the victim told investigators. “And another part is going, ‘This can’t be happening.’”

“Eric is known as the guy who hates gay people. We’re the church that built our church based on anti-homosexuality. He kind of has a caricature out there, so no way this guy is coming on to me. I’m misreading him.”

According to GRACE’s report, Dudley used the “oops, they accidentally gave us only one bed” trick multiple times with young men he traveled with for work. One victim said that Dudley went to bed in only his underwear and then reached under the victim’s clothes to grope him.

Another victim said that Dudley lay on top of him and became physically aroused.

A victim identified as John Doe in the report said that he met Dudley in Tallahassee when he was in seminary. Dudley gave Doe a job, took him on a $700 shopping spree, said that he wanted Doe to succeed him one day, and the two became friends.

After Dudley booked a hotel room with only one bed for the two of them and groped Doe, he made several passes at Doe when they were alone in his house.

Doe showed Dudley his new bed and Dudley asked him to lie down in it. Dudley got on top of him and started kissing him, taking off off both of their shirts. Dudley got aroused.

That’s when Doe pushed him off and said he didn’t want to have sex. Dudley got mad and stormed out.

The next day, Dudley had an excuse. “I don’t want to run away to California,” he allegedly said, implying that he believed that gay men have to live in California. “I’m not gay. I’m not into that. I just, I need your, I’m an affectionate person. I need to be touched by you.”

Another victim said that he got “incessant” text messaged from Dudley. If he didn’t answer immediately, he said that Dudley would show up at his house.

“It was so bizarre,” he said. “I think he thought we were in some kind of romantic, intimate relationship or something.”

That victim was so weirded out that he emailed an associate priest at the church and CC’d Dudley. Dudley tried to call the victim, and when he didn’t pick up Dudley showed up at his house, banging on the door and shouting “I know you’re in there!”

He said that he was worried that Dudley would break the glass on the door so he opened it, and Dudley was crying and said that the victim shouldn’t report him “after everything I’ve done for you.”

“It’s over,” Dudley said. “You screwed up. How dare you contact my employee.” The victim said he apologized.

The victims weren’t the only ones who saw this side of Dudley. One witness told GRACE that she noticed “a pattern of young males that seemed to have captured our rector’s eye.”

Another witness said that Dudley really liked “good-looking, thin, and fit young men,” according to the Tallahassee Democrat, describing the men as the kind “that women notice when they walk into a room.”

GRACE said that Dudley went far beyond giving attention to the young men, though.

“Once Father Eric developed enough trust in his relationships with the reported victims, he would use abusive tactics to further manipulate them,” the report said. “Again, Father Eric followed a pattern, exploiting his reported victims emotionally, financially, spiritually and physically.”

The report said that he also had anger issues and would bang on the desk and yell when criticized. His outbursts weren’t limited to his victims or to reports of sexual misconduct, like when he made workers uncomfortable walking around shirtless at a church retreat.

Dudley resigned last year and was given one year’s severance pay. A letter from a bishop at the time said that he was stepping down due to “inappropriate treatment of others, abuse of alcohol, and anger issues,” but it did not say that the victims were men.

This detail is significant because Dudley’s homophobia ran deep. He left the Episcopal Church in 2005 to start another church because Gene Robinson, a gay man, became bishop in New Hampshire. Afterwards, Dudley continued to speak against LGBTQ rights.

In 2015, he wrote an editorial criticizing the Supreme Court’s Obergefell v. Hodges decision, which expanded marriage equality to all 50 states. He said the decision was a “tragic event.”

In a sermon he was more direct, calling the decision “shocking, sad [and] infuriating” and said it was the result of a “well-oiled political scheme involving the media and Hollywood” that caused people to accept bisexuality, polyamory, and identification as “any gender.”

Trump Jr. urges followers to ‘trigger a liberal’ & ruin Thanksgiving for their family