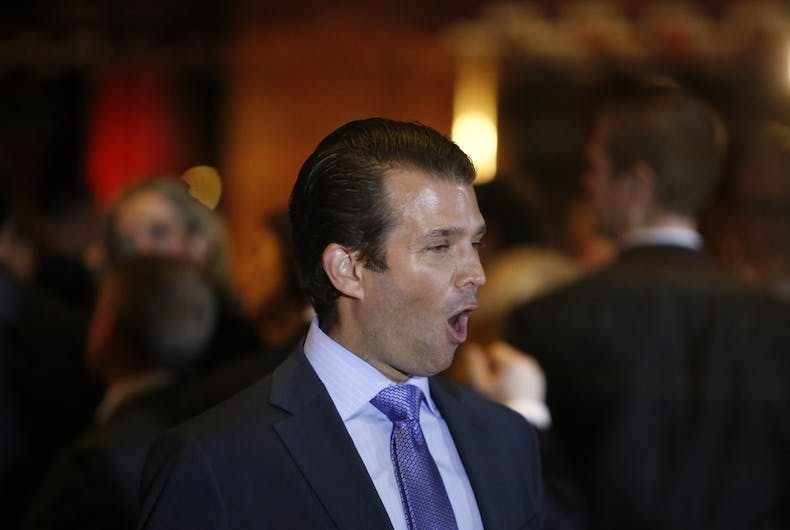 Yesterday, Donald Trump Jr. sent out a tweet in response to a story from our sister site Queerty, which was about the benefits of having sex with HIV-positive people.

“Yes, take responsibility for your health and do what you feel is best for you. But do so with an awareness of the potential consequences of those decisions. Refusing to entertain the idea of dating an HIV-positive person might just mean you miss out on the love of your life,” an excerpt of the article read. “Of course, some will say, ‘My perfect man doesn’t [have] HIV!’. Well, I hope you’re not too old before you realize: Nobody’s perfect.”

Unfortunately, most people missed the message for the second time around, and this time it didn’t help that Donald Trump Jr., the son of the President who has 4.1 million mostly conservative followers, responded to the article’s corresponding tweet.

Trump Jr. responded to the headline, “What you stand to lose by not having sex with people with HIV”, with the remark “Well I can think of one thing.”

The President’s son is insinuating that those having sex with HIV+ people are at risk of losing their life. Although HIV does not automatically become a death sentence and being undetectable (as most HIV+ people are capable of being) can prevent spreading of the virus, people like Trump Jr. have long ignored the facts on HIV/AIDS because it’s easier to make ignorant jokes about them.

As an Independent report reads, “Crucially, HIV is not the same thing as AIDS, which develops when the HIV virus has gone untreated and reaches its final stages. AIDS does often lead to death, but with proper medical treatment the vast majority of HIV positive people reach healthy life expectancies and never contract AIDS.”

Your comment is 100% part of the problem by strengthening Stigma which the entire world, the entire world, is rallying to destroy because it is literally possible, within our lifetime, to end HIV/AIDS. This ignorant drivel is all you have to offer? You’re on the wrong side.

“If someone is HIV positive, knows their status, is on effective medication and has consistently had an undetectable viral load, they cannot pass on the virus. PrEP is also widely available in the US and several other countries to prevent people from acquiring HIV. And condoms are also, of course, widely available,” Queerty‘s David Hudson wrote in the very article Trump Jr. shared.

Queerty publishes several LGBTQ+ sex-positive stories daily, including numerous on getting HIV- people to understand that they can have a relationship or sex with a HIV+ person without risking their health. It’s unclear why, or how, Trump Jr. came across the story and felt the need to comment on it almost a week after it came out. Under that tweet, conservative commentator Mark Dice also claimed that California allows HIV+ people to hide their status and knowingly infect people, which another user debunks.

That’s a lie, actually. They reduced the penalty, so now passing hiv has the same sentence as passing any other std.

However, the stigma promoted by Trump Jr.’s ignorance around HIV continues to exist and thrive in conservative and homophobic circles.

Editors’ note: An earlier version of this story misidentified the author of the Queerty article about Donald Trump Jr. We regret the error.