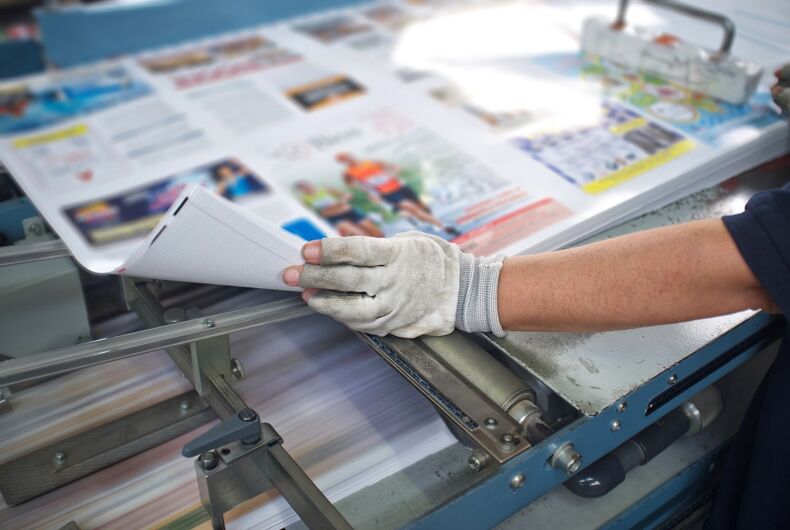 Citing their religious beliefs, a printing company in Alabama refused to print an issue of a college magazine because it contains content about LGBTQ people and drag queens.

Due South magazine is a student publication at the University of South Alabama, and they approached Interstate Printing to print their first special topics issue, which was about diversity and inclusion.

Interstate Printing “emailed me back and said they would be exercising their right to decline printing this issue because it does not adhere to their Christian values and they hope to print with us in the future,” said Editor-in-Chief Sara Boone, 21.

She said that the company has been printing Due South since 2012 and that she placed an order for 3500 copies and was quoted a price of $5000. But when the company saw the content of the magazine, they went cold.

Boone said that the issue had stories about diverse people at the University of South Alabama, including articles about religious head coverings, body positivity, and LGBTQ people and drag queens.

She said she suspects the LGBTQ stories were the ones the company had a problem with.

“As the magazine expresses freedom of lifestyles, we must express our freedom by declining to print on the principle that we are a Christian company that does not adhere to the content,” Tracy Smith of Interstate Printing wrote in the email. “We value the 40-plus years relationship we have with the University of South Alabama, and look forward to continuing our work with USA on other print and mail service projects.”

Interstate Printing’s website has a Bible verse on it and says: “We are a Christian company that will serve the Lord God Almighty in any way we can.”

The university has refused to condemn the business’s discrimination, saying in a statement that they “respect the rights of individuals and private businesses to make decisions that are consistent with their values.”

But the university will print the magazine instead and it’s due out on November 20.

Interstate Printing is not commenting on the incident and even hung up the phone when AL.com tried to get a comment.