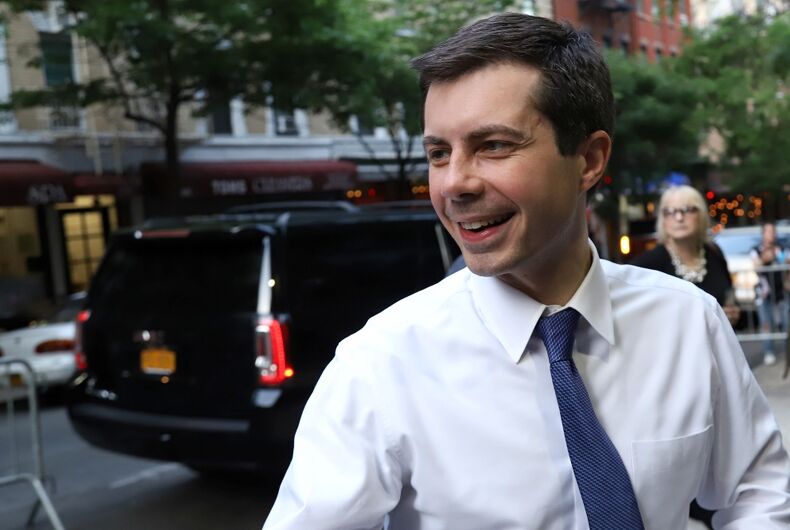 In the week leading up to the debate, Buttigieg found himself at the top of the polls in Iowa and New Hampshire, the first two states where Democrats will have a chance to choose the future Democratic nominee and the first two chances for the candidates to build up momentum during the primary season and show voters in later states that they are viable.

Related: The 4th Democratic debate ended with a question about Ellen & people are mad about it

Which meant that, even though he is polling in fourth place nationally according to RealClearPolitics, he is a threat to the other campaigns.

Sen. Kamala Harris (D-CA) was asked by the panel about her comments warning Democrats not to vote for Buttigieg earlier this week. In her response, Harris brought up a stock photo used by the Buttigieg campaign when he released his plan for address systemic anti-black racism in the U.S. That photo showed a black woman, but the woman was actually in Kenya, not in the U.S.

But she didn’t press the photo issue, saying that Buttigieg has already apologized, and instead she focused on what she called the “larger issue.”

“It really speaks to a larger issue,” she said. “The larger issue is that for too long, I think, candidates have taken for granted constituencies that have been the backbone of the Democratic Party and have overlooked those constituencies.”

She said that Democrats go to a black church when elections are near, but black voters want these politicians to “show up for me.”

“I completely agree,” Buttigieg responded. “While I do not have the experience of ever having been discriminated against because of the color of my skin, I do have the experience of sometimes feeling like a stranger in my own country, turning on the news and seeing my own rights coming up for debate, and seeing my rights expanded by a coalition of people like me and people not at all like me.”

Sen. Amy Klobuchar (D-MN) also walked back criticism of Buttigieg that she recently made on CNN.

“Of the women on the stage… do I think we would be standing on that stage if we had the experience that [Buttigieg] had? No, I don’t. Maybe we’re held to a different standard,” she said.

During the debate, Klobuchar said that she was “honored” to be on the stage with Buttigieg.

“But what I said is true,” she said. “Women are held to a higher standard. Otherwise we could play a game called ‘Name Your Favorite Woman President,’ which we can’t do because it has all been men.”

She also got in a joke: “If you think a woman can’t beat Donald Trump, Nancy Pelosi does it every single day.”

Rep. Tulsi Gabbard (D-HI) spent a large part of the evening railing against the other candidates and the Democratic party in general. Gabbard used her experience on foreign policy in the House Armed Services, Foreign Affairs, and Homeland Security committees to launch an attack on Buttigieg.

“I think the most recent example of your [Buttigieg’s] inexperience in national security and foreign policy came from your recent careless statement about how you as president would be willing to send our troops to Mexico to fight the cartels,” she said, referring to a comment Buttigieg made this past weekend about how he “would only order American troops into conflict if there were no other choice, if American lives were on the line, and if this were necessary in order for us to uphold our treaty obligations.”

Buttigieg responded by calling the allegation “outlandish even by the standards of today’s politics.”

“Do you seriously think anybody on this stage is proposing invading Mexico?” Buttigieg asked Gabbard sarcastically, getting applause. He clarified that he was referring to using military force in a hypothetical cooperative effort with Mexico.

“I’m talking about building alliances,” he continued. “And if your question is about experience, let’s also talk about judgment.”

He then brought up her infamous 2017 meeting with Syrian President and alleged war criminal Bashar al Assad.

“One of the foreign leaders you mentioned meeting was Bashar al Assad. I have in my experience such as it is, whether you think it counts or not since it wasn’t accumulated in Washington, enough judgment that I would not have sat down with a murderous dictator like that,” Buttigieg said.

Buttigieg used the debate to frame himself as an outsider: “I get it’s not traditional establishment Washington experience, but I would argue we need something very different right now. In order to defeat this president, we need somebody who can go toe-to-toe who actually comes from the kinds of communities that he’s been appealing to.”

He also said that he is the poorest person on the stage.

“I don’t talk a big game about helping the working class while helicoptering between golf courses with my name on them,” he said, referring to Donald Trump. “I don’t even golf. As a matter of fact, I never thought I’d be on a Forbes magazine list, but they did one of all the candidates by wealth, and I am literally the least wealthy person on this stage.”

A British Christian wanted to protest LGBTQ people at Disney. She got banned from the US instead.