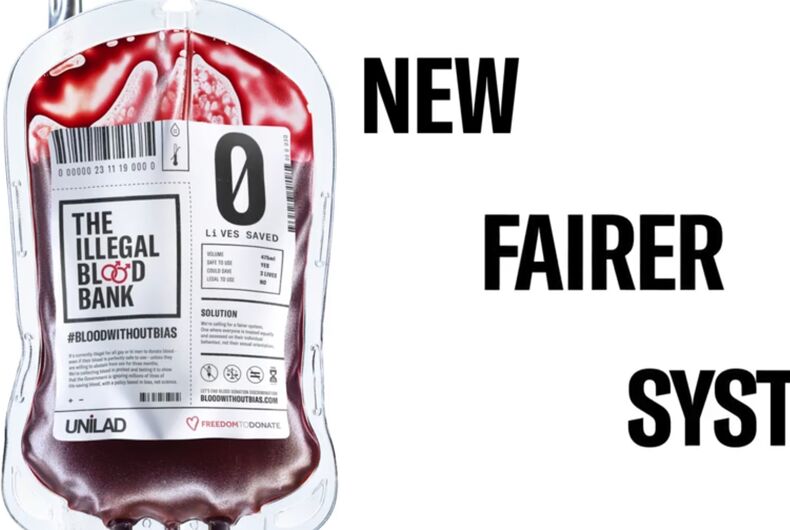 Activists in London will launch the Illegal Blood Bank to protest restrictions on gay and bi men donating blood.

Currently men have to wait three months in most of the U.K. (12 months in Northern Ireland) after the last time they had sex with another man to be permitted to donate blood. The deferral period is 12 months in the U.S.

The deferral period is long enough that sexually active gay and bi men are effectively banned from donating blood at all, and activists say that this has less to do with science and more to do with homophobia since it doesn’t take into account individual risk factors and associates all gay sex with HIV and STIs.

In protest, Freedom to Donate and UNILAD announced that they will open the Illegal Blood Bank on November 23. Their blood bank will be run by qualified medial professionals and assess HIV risk differently, asking about safer sex practices in their donor screening instead of effectively asking about sexual orientation.

“The three-month deferral period doesn’t take into account or consider much broader behavioral and lifestyle factors, for example, whether a gay or bisexual man is using protection,” UNILAD says on its site. “These factors significantly reduce the risk of carrying and transmitting blood-borne viruses and should be considered for all donors, not just gay or bisexual men, to help ensure all people who can safely donate blood are able to.”

“This group is using an evidence based approach to explore if a more individualized blood donation risk assessment can be safely and practically introduced, while ensuring the safe supply of blood to patients,” said Su Brailsford, Consultant in Epidemiology and Health Protection for NHS Blood and Transplant.

The blood will not actually be used in a clinical setting. UNILAD says they’re trying to make a point about how much blood could be donated if the gay blood ban were lifted and how safe it would be with their individualized risk assessment approach.

The U.K. has experienced a 25% drop in men donating blood since 2014, and the NHS has resorted to “manly” advertising techniques like telling people to “bleed for the country you love” in order to get more donors.

A gay man’s salary was cut in half when he came out. Now he’s suing.