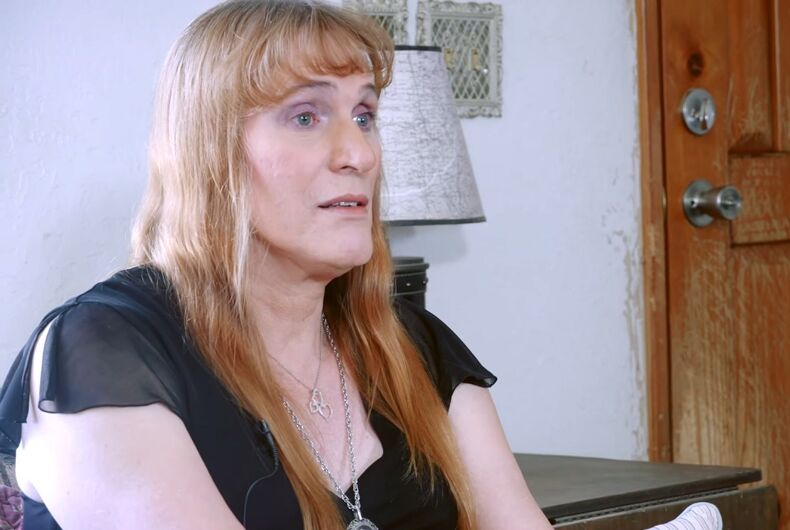 Diane Roberts, a transgender woman in Albuquerque, New Mexico, is suing her former employer, ABF Freight Inc., for discrimination, harassment, and firing her.

The details in Roberts’ court filing show how much harassment she allegedly suffered before ultimately losing her job, from being forced to use a filthy restroom that was vandalized with a penis on the door to getting regularly deadnamed and misgendered.

Roberts started working for ABF Freight as a diesel technician in May 2013. Then, in December that year, she announced to the company’s Human Resources department and her manager that she intended to transition.

At the time, no other women worked at the facility and all her other co-workers were male. Because of this, the building lacked restrooms or locker rooms where women could relieve themselves and change into their work uniforms.

Roberts suggested that the downstairs bathroom be converted to accommodate her gender. She also asked for a female uniform and for several days off at the start of February 2016 during which time the company would inform her co-workers of her transition, her pronouns and other anti-harassment and discrimination protocols using resources from the Transgender Resource Center of New Mexico (TRCNM) so she could safely return as her female self afterwards.

The company agreed to all these conditions and, Robert says, they broke nearly all these promises. They didn’t contact TRCNM, they refused to get her a female uniform, supervisors regularly misgendered her, and one regularly played loud radio programs bashing the transgender people well within her earshot.

Instead of making the downstairs restroom a women’s restroom as promised, Roberts said they made it gender neutral and allowed other male employees and visitors to use it even though male employees already had their own designated restroom.

After Roberts returned to work, someone drew a penis on the bathroom door, covered its doorknob in engine grease, glued its light switch in the off position and regularly tore her air fresheners off the wall, and left foul-smelling things in its garbage can. Co-workers also began urinating in the bathroom with the door open. The company never investigated any of this, Roberts claims, and generally refused to clean the bathroom.

Here’s a video of Roberts discussing the discrimination she faced:

The company’s uniform provider offered to install a downstairs bathroom hamper so Roberts wouldn’t have to walk into the men’s locker room to deposit her dirty uniform or retrieve clean ones, but ABF Freight refused. When they finally built a women’s changing room, it was just an unlocked, partitioned area close to her male coworkers. Its open walls allowed others to peek in while she was changing. It also had no showers or sink to help her clean off mechanical grease and grime.

When Roberts complained, her supervisor called her “sir” and by her “deadname.” He also gave Roberts a new employee identification card with her deadname and old male picture on it.

Her co-workers sabotaged her mechanic work. One glued her toolbox shut and another refused to work alongside her in repair bays. She was also told on hot days that she had to keep her workshirt buttoned all the way up and that she could never strip down to a tank top, per company policy. She was never given a copy of this policy and her male co-workers were allowed to do both.

When she began to regularly miss work due to stress over workplace harassment, her supervisor refused her copies of doctor’s notes, demanding the originals, even though he had taken copies of other employees’ doctors notes in the past. She was eventually fired for missing too many days of work due to stress.

After being fired, she filed a complaint with the Human Rights Bureau of the New Mexico Department of Workforce Solutions. The bureau said she had “probable cause” for a discrimination claim. Afterwards, she filed a civil claim in New Mexico’s courts. The state’s laws forbid workplace discrimination based on gender identity. The ACLU will represent her in court.

This foster kid dreams of being adopted… by two dads

Homophobia and homosexuality during World War I